The first part of this two-part series proved to be very popular. While last week’s edition focused on aerial photographs of the center city, this week’s collection looks at neighborhoods just outside the city center.

As previously noted, Brian Spitzig is studying urban planning at the University of Cincinnati and is an occasional contributor to UrbanCincy. He recently took a flight over the city to capture these photographs.

We went through hundreds of photographs that he took and selected some of the best for you. The following 14 photographs capture views of the West End, Queensgate, Corryville, Mt. Auburn, Mt. Adams, Clifton Heights, Walnut Hills and University Heights. One of the best, and lesser-known, events in Cincinnati is Balluminaria. The annual event helps kick off the holiday season festivities at Eden Park, and will take place this year on Saturday, November 21 from 4pm to 6pm. The “balloon glow” event has grown in popularity over the years according to park officials, and now coincides with the opening of the Holiday Flower Show – a must see for any family – at Krohn Conservatory.

In addition to the balloon glow there will be costumed carolers, clowns, and concessions all around Mirror Lake for Balluminaria 2009. Those attending are encouraged to bring their cameras along to capture the incredibly beautiful scene of the hot-air balloons surrounding Mirror Lake. 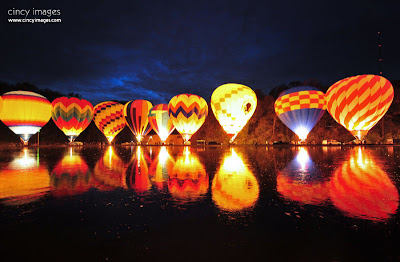 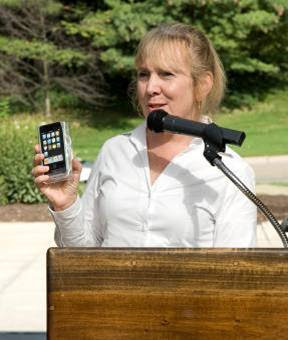 Visitors to Cincinnati’s famous Krohn Conservatory can now enjoy an even more interactive and engaging visit by utilizing the new technology available that includes podcasts, videos, self-guided tours, and a virtual tour.

A new partnership between the Cincinnati Parks, the Primax Group, Cincinnati Public Schools’ Zoo Academy, Sound Images, and Apple has led to the implementation of the new technology that can be used to enhance your experience to Krohn. “Our design partners have put together a phenomenal combination of information, photos and audio files to be used as pre-visit preparation or self guided touring,” according to officials at Krohn Conservatory.

One of the new features is the availability of MPEG-4 audio and video tours that can be downloaded to your mobile device. If you aren’t privileged enough to carry your own mobile device like that, then you can try to borrow one of the few that Krohn has to lend out. With the audio and video tours guests can learn at their own pace about the botanical collections at the Palm House, Tropical Fern House, and the Desert House. There is also a special piece on the history of Krohn Conservatory. A new virtual tour of Krohn that highlights the best of the botanical collections at Krohn including the conservatory’s history.

The current Fall Floral Show, Backyard Birds and Wildlife, is the first show running with the new self-guided iPod tours, and is the first show since the Krohn Conservatory completed its major renovations earlier this year.

Krohn Conservatory (map) is open daily from 10am to 5pm. Free parking is available in nearby Eden Park surface lots. Metro’s #1 bus route also serves the facility (plan your trip now), and nearby bicycle parking is also available. 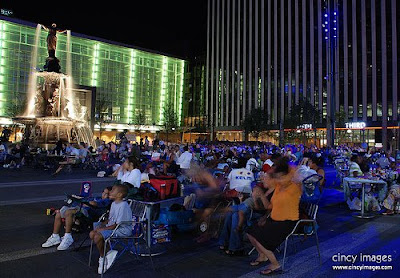 The way things are going these days, it’s tough for some families to afford a trip to the movies. Luckily, in addition to the family-friendly movies every Saturday on Fountain Square (at 7 & 9pm), the Cincinnati Parks Foundation has been showing family friendly movies in our parks all around the Cincinnati area.

Forget paying to see a movie and having to buy overpriced concessions, there are great movie options literally in your backyard! All movies start at dusk and will have concessions available.

Below are some of the remaining movie nights:

If you are looking more for musical fare, the 16th annual “Its Commonly Jazz” series is being kicked off this week at Eden Park in Mt. Adams. Since I’m not really familiar with jazz and we have been provided with a relatively cool summer thus far, these concerts are a great way to get a free introduction.

The website is billing this event as “staying green”, but it’s not clear whether there is an actual intent to have eco-friendly anything or if it is just a play on words since all events are outdoors. From what I understand, you can bring a picnic to enjoy while watching the music, but I am not sure whether alcohol will be allowed. The website gives good background on each of the performers, but seems to be a bit underdeveloped beyond that.

Maybe the economy has made the local government and parks board boost these kinds of outdoor events, or maybe they are just better publicized these days, but I hope they keep it up. Hopefully as more people get out of doors and enjoy our local parks they will better appreciate the wonderful parks system we have and the great amount of forethought that goes into the planning of the events that are planned in them. Many people do not know we have one of the top parks systems in the nation, and these events are a great way to get out and enjoy them for free!

Photo by Jayson at Cincy Images