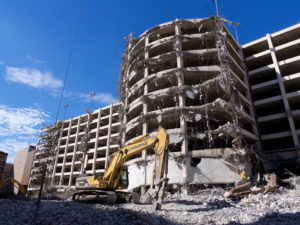 UrbanCincy readers may know that the 84.51° Center (formerly Dunnhumby Centre) in Downtown Cincinnati includes an above-ground parking garage that can be converted into office space at a later date. The building was designed this way because of anticipated future growth of the building’s namesake tenant.

An increasing number of parking garages across the country are now being designed in this way. That’s partially because developers are starting to understand that our urban real estate is better used for office space, residential, and retail as opposed to car storage. Developers also predict that the demand for urban parking garages will decline as self-driving cars start to appear in the coming decades — why park your car in an expensive garage downtown when you can send it back home after it drops you off at work?

“It’s smart use of resources and space is a resource,” Cohen said. “If you’re designing a building and there’s space that potentially could become obsolete over time, that’s just a wasted opportunity.”

Building parking that has future life as something else requires particular thought to the garage’s floor-to-ceiling heights and slope of the floors, Fisher said.

“The typical sloped-ramp parking garage has about a 5 percent slope,” Fisher said. “You can’t work in that space.”

Instead, the floor plates need to be flat, with discrete ramps between the levels, Petersen said. At WTC Denver, the ramps are being designed so they can be removed someday, leaving a light-filled courtyard. On the 65th episode of The UrbanCincy Podcast, Travis, Randy, and John are joined by Charlie Monte Verde of Amtrak.

We discuss the Cardinal Conference that was held in late September and the possibility of upgrading the Cardinal — Cincinnati’s sole intercity passenger train — to daily service.

We also discuss why Amtrak’s overall ridership is continuing to rise year over year, and what it would take for additional Amtrak routes to be added to Cincinnati’s Union Terminal.