The people want the parks, and lots of ’em.

In no surprise to anyone, it turns out that people like to live near parks and that they want lots of parks from which to choose. Well then, which cities invest the most and have the best park options for their current and potential residents? Not Cincinnati, technically, but the Queen City does invest more in its park system than most. More from City Parks Blog:

Large amounts of parkland in cities is important, but equally vital is to have parks which are nearby and easily accessible to residents, according to the latest report by The Trust for Public Land. In seven of the nation’s largest cities — New York, Chicago, Boston, San Francisco, Philadelphia, Seattle, and Washington, D.C. — nine out of 10 residents live within a one-half mile walk to a park, according to the report.

The absolute amount of urban parkland is also significant, and among the cities with the largest park acreage are Jacksonville, Houston, Phoenix, San Diego and Los Angeles. But some cities, even those with a lot of parkland, are not laid out so that the land is well-located for residents’ easy access. These places include Charlotte, Jacksonville, Louisville, and Indianapolis.

Like Cincinnati, Philadelphia is struggling with what to do with a proposed casino in its center city. Concerns include potential crime, urban design, historical context, and a worry about such a large area of the urban environment being owned and controlled by one entity. More from Next American City:

Blatstein is the latest high-profile developer to throw his hat into the ring, with the 120,000-square-foot “Provence Casino” plan that would transform the former Philadelphia Inquirer and Daily News complex. The former offices would house a 125-room hotel and table games, while former loading docks and a parking area would be expanded into additional casino space and a massive commercial area, topped with an extravagant French-themed rooftop “village” and indoor botanical garden. According to Tower, the project will create 5,300 permanent positions for casino workers, in addition to thousands of temporary construction jobs.

More cities looking to roll the dice on urban casinos.

As Cincinnati moves forward with its new casino in Pendleton, Chicagoans are dealing with a political setback that is preventing a casino from operating in Illinois’ biggest city. While Chicago Mayor Rahm Emanuel (D) supports the idea, Illinois Governor Pat Quinn (D) is concerned expanded gambling could open “loopholes for mobsters.” More from Next American City:

Emanuel insists that a downtown casino is so lucrative an economic development tool that any delay in construction is depriving the city of valuable tourist dollars and a new source of educational funds.

The debate is just the latest in a decades-long controversy over what role, if any, casinos can play in the revival of America’s cities. The economic downturn has given states an impetus to open up new sources of revenue, with gambling often viewed as low-hanging fruit. Twelve states have expanded gambling options in the last three years, 22 now permit commercial casinos (up from two in 1974), and Hawaii’s legislature is currently considering plans that would leave Utah as the sole state without some form of legalized gambling.

Depending on the outcome of the political struggle, Chicago could supersede Philadelphia as the largest American city with legalized gambling. 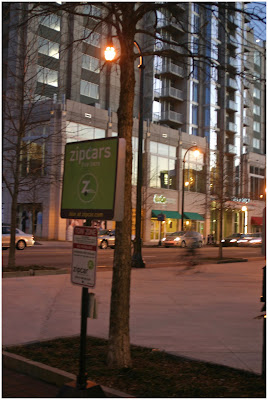 As Cincinnati painstakingly works its way towards a more comprehensive transit network we must not forget that American cities are largely built around the automobile and sometimes having access to an automobile makes life easier. This does not mean that you must own and maintain a personal automobile though.

Out-of-town trips, special occasions (i.e. moving, joy ride, date), or trips to locations accessible only by automobiles are then made easily accessible for those not interesting in owning and maintaining a costly automobile. Users of car sharing programs like Zipcars have been found to reduce the number of automobiles per household and increase their usage of transit, bicycling and walking.

If you look further to downtown Atlanta you can add in another seven Zipcar locations with two more in the Inman Park/Little Five Points area just a stones throw away. In downtown Cincinnati and historic Over-the-Rhine the trend continues with zero Zipcar locations serving a higher density urban community than its Atlanta counterpart.

In the rest of Atlanta another 14 Zipcar locations can be found bringing the total to 44 Zipcar locations in Metro Atlanta with one to two cars per location while Cincinnati has none. Meanwhile in Cincinnati car-free individuals struggle to make things work in a limited-bus and car only city with many more looking to have the option of living car-free or car-light.

The number of American cities that boast public transit systems comprehensive enough to allow for mainstream car-free lifestyles can be counted on one hand. As a result car sharing programs like Zipcars play an instrumental role in the process of creating a lesser demand for personal automobiles. And it seems to me like Cincinnati is a perfect urban region for such a program, and regional leaders in Cincinnati should examine establishing a local carsharing program as has been done in cities like Philadelphia and Cleveland.