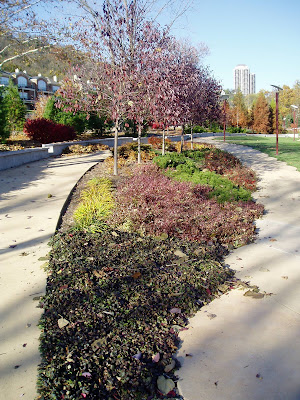 As a native of Chicago, when I first moved to Cincinnati I was surprised by the lack of residential development along the river. Now that I have lived here for nearly 8 years, the perspective I’ve gained on our riverfront system has changed. This is particularly true as plans move forward for the riverfront parks system extension that The Banks will bring.

This past weekend, I was in Chicago, and was struck by how fortunate the city was to have a wide open expanse of parks and walkways to separate the lake from the high rises. The history behind this parks system begun 170 years ago, when settlers were establishing Chicago as a Midwestern trading post.

“When the former Fort Dearborn became part of the town site in 1839, the plat of the area east of Michigan Avenue south of Randolph was marked ‘Public ground forever to remain vacant of buildings’” (source).

As a result of this green space being established, it has acted as a gathering place for people of various backgrounds and economic levels to gather and listen to music protest or celebrate. Within the lakefront park system, Millennium Park offers water fountains you can walk and play in (a nice departure from beautiful but not hands-on Buckingham Fountain), a band shell that there is regular programming in, and the multi-sensory Bean to look at and touch.

With The Banks continuing at its steady pace, there are already people gearing up to have funding in place to start programming for families at the new riverfront park system that will be built in stages over the next three years. In the Cincinnati Parks e-newsletter, a thank you was put out for a fundraiser that occurred recently which raised over $100,000 for family programing at the Cincinnati Riverfront Park.

All of the other riverfront parks we have in place are excellent places to walk through or go to a weekend festival, but I don’t often hear about family programming that goes on in those parks unless it’s associated with the festival. Hopefully as time goes on, we can start seeing well-advertised day camps or even day workshops for families to attend at no or reduced cost. A park has to offer more than just a place to stop and enjoy the scenery – it needs to be a place that is interactive and appeals to a wide demographic.

Following this rubric, the planners hit the target with programming on Fountain Square every week that offers not only a different genre of music nightly, it also offers special programming during the day to get downtown workers involved in games, farmers markets and live cooking shows. Additionally, the architects of the square itself did an excellent job planning interactive fountains for children to play in while parents watch Reds games and enjoy food from the local eateries. Let’s hope the planners of the layout of the new riverfront parks and those who put together programming think in the same vein.