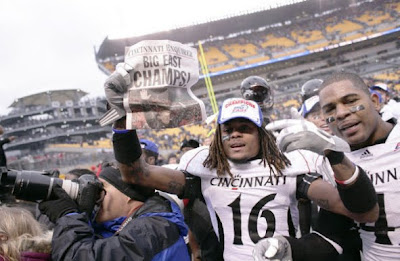 For those of you looking to get your brew on this weekend, the Comet in Northside is hosting a rotating beer tasting tonight (Thursday), Friday and Saturday evenings. It’s almost like a music festival, only with beer:

Every hour on the hour a new beer gets rotated into the line up, and there is a list of new brews each night. This is the list for the beer lineup, though it is unlikely that this is the order in which they will appear. If we get any more information on this event, we will let you know.

The City of Cincinnati announced yesterday that its yard waste collection service for residences and business owners has been canceled. The move comes on the heels of suspended discussions about the use of larger recycling carts, and reforms presented by City Manager Dohoney that would streamline and pay for a new waste collection system.

During the budget discussions in past weeks, many fiscal conservatives openly mocked the idea of investing in new recycling carts for City residents. The 64-gallon wheeled recycling carts would have put recycling on a comparable level to normal trash pick up in terms of capacity, but would have also cost the City a $3.5 million of upfront capital. The debate was quickly ended and the discussion about improving the City’s recycling program has been indefinitely suspended.

These are not the first of the items that have set waste collection and recycling back in Cincinnati. In November 2008, City Manager Dohoney proposed a new waste collection fee to help balance the budget, and went on to say that a $300,000 study of a automated trash collection system using trucks that lift cans with mechanical levers instead of having city workers do the heavy lifting.

Photo from the City of Cincinnati

The automated system would, in the long-term, save the City money as Dohoney reported that “we are averaging seven people out a month with some type of injury as a result of how we collect solid waste.” Dohoney went on to say that those injuries were costing the City approximately $1 million a year. Both this, and the trash collection fee, were met with heavy criticism as many did not like the idea of a new fee, for an otherwise indirectly paid for service through property taxes.

But as the politicians and community leaders continue to punt this issue back and forth the problems still exist. Cincinnati’s rates of recycling are far too low, the costs associated with trash collection are still too high, the efficiency of collecting trash is still not where it needs to be, and users still have no benefit to reduce their waste production.

The solutions are present. City Manager Dohoney’s proposal was a step in the right direction, but the adoption of a RecycleBank-style program would be another step towards reducing the production of waste and encouraging higher rates of recycling. A ‘Pay as You Throw’ (PYT) system would require users to pay for their waste collection based on the amount of waste they produce, something that would encourage lower rates of waste production and higher rates of recycling when paired with a RecycleBank-style program.

It is truly unfortunate to see long-term economic, social and environmental benefits cast aside due to the fear of an initial capital cost that is seen as either being wasteful or too much given the current economy. In addition to growing revenue streams, cities also need to find ways to improve their efficiencies for not only their customers, but their bottom lines. These kinds of actions would help avoid future personnel cuts the next time an economic downturn hits, and make city operations more responsive.

The results from these cuts will be seen quickly and easily as people will immediately start discarding their yard waste with their regular trash. The use of smaller recycling bins versus larger carts that are easier to use will continue to stack the deck against recycling over regular disposal that might be more convenient. The progress that Cincinnati has made on this front in recent years might just all be lost in one budget cycle.

Yard Waste Cancellation Details:
Beginning Friday, August 21, yard waste collection will be discontinued as a separate service. The City will maintain regular garbage collection and will pick up yard waste as a part of that, although City officials strongly encourage residents and business owners to find alternative means to discarding their yard waste (i.e. composting, mulching, yard waste drop-offs). If you have additional questions, or would like to find the Hamilton County yard waste drop-off location nearest you visit this website.

I love the custom GoogleMaps that you can create. An easy one to put together is one that shows where you have traveled, lived and plan to visit. You can check mine out HERE, but I want to see where everyone has been too…so create your own and post the link as a comment.

I have taken mine a step further and placed links to my photo galleries of the places I have been to and photographed (photos from Charlotte, NC and Greenville, SC should be up shortly). 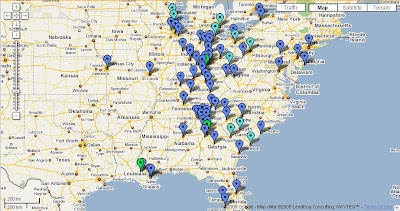 As some of you may know, I have been out of town (Atlanta) on business for the past couple of months. For the past two weeks I was shipped off to another area (Baton Rouge) to continue my work, and I thought I would relay my thoughts on Louisiana to the great readers of UrbanCincy.

I spent most of my time in Baton Rouge. I will say that the people are very laid back and easy to get along with, but with that said…Baton Rouge seemed to be lacking any coherent development pattern(s), disposable income, and most importantly it was muggy even in February. The place was alright. Downtown had a few museums, lots of government buildings and some new construction. Overall Baton Rouge was kind of dirty, a little sloppy and somewhat depressing.

I was also able to spend a weekend in New Orleans. I spent the majority of my time there in the French Quarter and loved every minute. There were some other nice areas that I saw (Magazine Street), but overall New Orleans seemed to have many of the same qualities as Baton Rouge but on a larger scale.

The Lower 9th Ward looks as if the hurricane had just recently hit, and the place is almost entirely vacant. The CBD was kind of creepy and not all that comfortable. If you would like to hear more rantings and most importantly see my pictures of the cities…check out my photo threads on UrbanOhio.