With the college football season behind us, the $86 million renovation and expansion of Nippert Stadium is now in its home stretch. At this point, the majority of structure work is now complete and interior work is now advancing during the cold weather.

The project is more of a renovation than it is an expansion. As part of the upgrades just a few thousand more seats will be added, along with the luxury boxes, overhauled concessions and restrooms, lounges and new technology that define the project.

A challenge from the beginning, however, was adding the new amenities in an environment severely constrained by existing buildings that at some points already help frame the stadium’s exterior. In order to accomplish that, New York-based Architecture Research Office, in collaboration with Heery International, designed it so that the structure would move upward along structure’s west side that sits adjacent to Tangeman University Center. The final results are interesting and unpredictable in a manner that should only add to the venue’s notoriety as the Wrigley Field of college football.

As part of the effort to upgrade the 114-year-old stadium, the University of Cincinnati has been issuing video updates about every three weeks. The latest includes Tom Gelehrter, Senior Director of New Media and Broadcasting at Bearcats Athletics, talking with project manager Bob Marton about recent progress that has been made and looking ahead to what is next.

One of the more notable changes in this update was the start of drilling work on the east concourse, which will eventually allow for construction of the two-story restroom and concession facility, stairways and light poles.

“A year ago we were drilling in this building, and now we’re drilling on the other side,” Marton explained in the the 5:29 video update. “We’ve got two levels of drilling going on…and that’s about a week’s worth of work.”

Due to the careful scheduling of construction activities, project officials do not anticipate ongoing cold temperatures to cause much of an issue since they had gone through it once before when drilling on the west side of the stadium last year.

If the project stays on schedule, it is expected to be complete by August 2015 – just ahead of this year’s September home opener for the Bearcats.

EDITORIAL NOTE: An earlier version of this story incorrectly stated that FRCH Design Worldwide was the architect of record for this project. In fact, FRCH produced the project’s conceptual designs, while Architecture Research Office and Heery International were the primary designers.

The 2014 Big East Basketball Tournament will be its last before the ‘Catholic 7’ take over and make the conference their own. This year’s tournament, which starts tonight at Madison Square Garden, will be its last in Midtown Manhattan. After that, league sources say that they will look to host the tournament in a new location with Cincinnati being one of the finalists for 2014. Could this be Cincinnati’s next major event following the World Choir Games and preceding the 2015 All-Star Game? More from ESPN:

The current Big East, which must have a new conference name by July 1, will be left with a 10-member league in 2013: Cincinnati, UConn, UCF, Houston, Louisville, Memphis, Rutgers, SMU, Temple and USF.

Louisville and Rutgers will remain in the league one more season before moving to the ACC and Big Ten, respectively, in 2014. The remaining Big East schools are considering new sites for next year’s tournament, including Hartford, Conn.; Memphis, Tenn.; Cincinnati and Dallas.

The University of Cincinnati boasts one of the most urban college campuses in all of America, and quite possibly the most unique stadium in Division 1 football. As a result, Nippert Stadium’s scoreboard is mounted atop a neighboring building, midrises surround the sunken playing field, and the intimate venue is situated in the heart of campus.

This urban football setting also means that there are not seas of asphalt where fans can tailgate before and after the game. Bearcat fans instead tailgate on campus green areas, inside parking garages, and on surrounding streets. But as the Bearcats have their home opener tomorrow, fans will not only be treated to back-to-back Big East champions, but also a new tailgating experience just blocks away from the stadium on Short Vine.

Partially to satisfy the tailgaters displaced from one of the last remaining parking lots on campus which is now home to the Jefferson Avenue Sports Complex, and partially to create a fun new urban tailgating experience for fans, the Short Vine Business Association (SVBA) has created the Uptown Cincinnati Bearcat Block Party.

With help from UC Athletics and the Uptown Consortium, the SVBA will offer live music, food and drinks, and entertainment in addition to the wide array of businesses found on Short Vine that will remain open during the event. Organizers say that the free street festival will take place two hours before and after every single Bearcats home football game along the 2600 block of Short Vine.

Nearby parking lots will be made available for fans needing to stash their cars away during the game, and a free shuttle will transport those to the game that would prefer to not walk the few short blocks.

Two great videos by CNATI and one from the Enquirer:

Well it’s official. Brian Kelly did what everyone thought he would do and follow in the footsteps of Mark Dantonio. The reports are out that Notre Dame will announce Brian Kelly as their next head coach, and BK will more than likely not spend a minute more with his dedicated players and team after the team’s banquet this evening.

It’s a perfect ending to a perfect season in a sick kind of way. The whole year the team played with the motto of “Next Man In” almost as if Brian Kelly saw the writing on the wall months ago that he would cut and run on his team before the biggest game in UC football history. Three short seasons ago BK joined the Bearcats and coached them to an International Bowl championship, PapaJohns.com Bowl championship, then two consecutive Big East championships with a disappointing performance at last year’s Orange Bowl against Virginia Tech.

BK has made the most of his players and turned the program into a national powerhouse building off of the foundation that Mark Dantonio so nicely poured for him. Now BK is off to Notre Dame where the cabinet won’t be left quite as full and the expectations not quite so low. 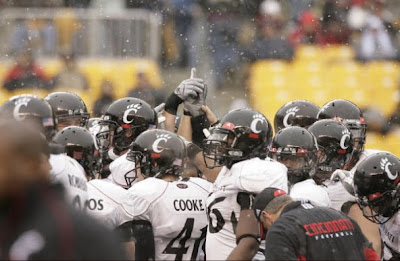 In Cincinnati, BK was on his way to becoming a local legend and turning the Bearcats into the premier football school in the Big East with perennial BCS bowl games and National Championships on the line. At Notre Dame BK will be expected to win National Championships from the beginning and anything less will be a disappointment.

The news comes on the heels of the Bearcats undefeated season where they repeated as Big East Champions and in which they came just one second or a missed field goal away from playing for the National Championship. Bearcat fans rewarded the team and BK by turning out record crowd, after record crowd at Nippert…and by selling out the team’s entire 17,500 ticket allotment to the Sugar Bowl where the Bearcats will play the Florida Gators.

Add in the fact that BK’s seniors poured their hearts into a game that will go into the history books (video) against Pittsburgh in the final game of the regular season where they came from 21 points down to win in the waning seconds by 1 point. It was such an emotional and important win that senior leaders Tony Pike and Mardy Gilyard broke out into tears of joy…but who cares.

BK certainly has a fat paycheck waiting on him in South Bend in addition to a slew of absurd benefits. He will also be able to play under the watchful eye of Touchdown Jesus, and be judged by fans who feel more entitled to everything and anything, without any real reason. BK will also be taking over a team that hasn’t had a defense in years, and whose two best offensive players just declared themselves for the NFL Draft.

The University of Cincinnati is a top-notch school and program, and Cincinnati is not some stepping stone city. As much as I love Bearcat football, and what BK has done for it, he’s gone now and I’ve moved on. Good riddance BK, and I wish you as much luck at ND as Dantonio has had at Michigan State.

In the mean time, watch this GREAT VIDEO on the Bearcats instant classic win over Pittsburgh. It’s inspirational and the sound track is perfect given this news. BK, you’re just the past now. It’s our time.