On the 61st episode of The UrbanCincy Podcast, we are sharing three of the stories from the latest edition of Cincy Stories, which was held on November 3, 2015 at MOTR Pub.

These speakers are Desi Marie, also known as The Silent Poet; Bonnie Meyer, the Director of LGBTQ Programs & Services at Northern Kentucky University; and Jay Shifman, a community activist who works with the Walnut Hills Redevelopment Foundation and other local organizations.

The next Cincy Stories event will be held on February 2. It will feature speakers Katie Vogel, Derrick Braziel, Corey Ward, Mac Means, Jai Washington, and Claire Suer, as well as local music from Andrew Aragon.

Second Sunday on Main (SSOM) returns to the streets of Over-the-Rhine this Sunday, from 12pm to 5pm, after drawing a record attendance and number of vendors for its first festival of the season last month.

As is the case with all SSOM events, this one will once again feature dozens of local arts and crafts vendors, local food and beer, live music, food trucks, street performers and more.

The event is free and open to the public, so even if you don’t have a bunch of cash to drop, you can swing through for a leisurely stroll and people watch in what is Cincinnati’s oldest and most prominent Open Streets events.

Each month event organizers change up the theme for SSOM; and this month’s event is called Pride on Main. To complement the theme there will be the Missed OTR Drag Queen Contest and the famous Drag and Tryke Races, both of which will have their proceeds go to benefit Pride 2015.

This is the ninth year the OTR Chamber of Commerce has put on Second Sunday on Main. For those who haven’t attended in the past, the event stretches from Thirteenth Street to Liberty Street along, you guessed it, Main Street. There are also small segments of side streets that are closed off and include some additional activities.

There will also be a cooking demo by Chef Jose Salazar and speciality cocktail demo by bartenders Andrew Rettig and Steven Clement at 2pm inside Mr. Pitiful’s. Throughout the day, Art on the Streets will also be working on a crosswalk painting project at Main and Liberty Streets.

A full schedule and list of music performers and other details can be found on SSOM’s website.

EDITORIAL NOTE: UrbanCincy is an official media partner of Second Sunday on Main; and is proud to support the city’s oldest open streets festival. Since 1988, individuals and organizations alike have been celebrating National Coming Out Day on October 11. The day is meant to serve as an opportunity and means of support for those in the lesbian, gay, bisexual, and transgender communities who are struggling to be open about their gender and sexual orientation. The day also serves as an opportunity to raise awareness of the LGBT community in the United States and throughout the world.

Having a strong gay community is a key part of having a strong urban core. When you look at cities in North America with vibrant cores, they tend to have successful, happy LGBT communities as well. This occurs because we gays are an urban bunch, often pioneering urban development, forming a niche in the city, and claiming a space of our own.

These ‘gayborhoods’ become identifiable with the LGBT community and a sense of pride is taken to ensure they are maintained. Chicago has their Boystown, San Francisco has The Castro, and New York has…well…Manhattan. These places are thriving urban neighborhoods, act as ethnic enclaves for their respective cities, and are a key part of a diverse, vibrant urban core.

If Cincinnati and other Ohio cities want to have diverse, active, and interesting urban cores, Ohioans must embrace the LGBT community and allow them to maintain or establish a successful niche. Downtown Cincinnati’s tag line “Life Happens Here” has never seemed more appropriate than this coming weekend, July 2-4, when the fabulous Equinox Cincinnati: Pride 2010 parade and festival takes place on 5th Street and Fountain Square. Pride is an all-weekend, annual festivity that gives the Greater Cincinnati LGBT community and allies a chance to come together and celebrate their individuality as well as diversity in general.

This year’s event is seen as a major turning point for the Cincinnati LGBT community, as Pride will once again be held downtown for the first time since 1995. For the past ten years, the parade and festival has been held in the gay-friendly neighborhood of Northside, but after the Cincinnati Gay Chamber of Commerce took over the event this past year, the powers that be decided a better fit for the parade and festival was Downtown, a place that can properly showcase the increasingly visual and centralized gay Cincinnati community.

This move is seen as a positive turn of events by many Pride supporters, including Brian Reynolds, President of Cincinnati Men’s Chorus.

“Cincinnati Pride really did outgrow tiny Hoffner Park in Northside several years ago. And as much as I enjoy Northside and how much it has to offer, it just makes sense to me that Pride would move at this point from a neighborhood to someplace more central,” Reynolds explained.

He also believes moving Pride downtown has bigger implications beyond solving space issues in Hoffner Park, noting “This change has the potential to make the gay community and this event more visible than it has ever been, and visibility is the key to what we all want – acceptance.”

With its new location comes the new time frame of July 2nd-4th. Cincinnati Pride is typically held in the last weekend of June but was pushed back to the first week of July because most downtown hotel rooms were booked for a convention. The switch seems to have worked out for the better, as it coincides with the holiday weekend and no longer competes with other regional prides, like the hugely popular Chicago and Columbus Pride events. With the new time frame set, organizers expect the event to draw a large number of out-of-towners and help build on past successes, as last year’s Pride drew upwards of 20,000 people.

Downtown leaders and businesses were quick to show support for Pride and its date change. Pride flags can be seen along 5th Street – the Pride parade route, Downtown Cincinnati Inc. has included Equinox in its marketing campaigns, and numerous billboards around town advertising the festival. With all these changes and the support of the downtown community, there is an aura of excitement and energy around this year’s Pride.

As Reynolds explains, “With Pride this year falling on the Independence Day holiday, with the relocation, and with an entirely new team organizing the event — the Gay Chamber of Commerce — I have no idea what to expect. But I can’t wait to experience it and hope it continues to grow after this inaugural year.”

This year’s Pride events are bigger and better than ever. Below is a summary of the major events that can be enjoyed by anyone. Check out the Cincinnati Equinox Pride website for additional details.

Greg Meckstroth, editor for UrbanOut, holds a geography degree from the Ohio State University along with a Masters in Community Planning from the University of Cincinnati’s nationally-ranked School of Planning. Greg currently works as an urban designer with an planning and design firm in Indianapolis. 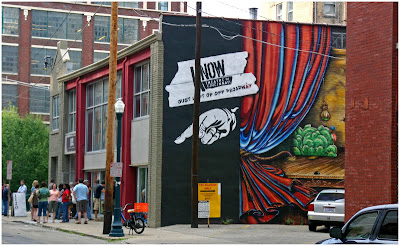 “We are dedicated to the idea and the realization of the LGBT Arts Festival,” said Eric Vosmeier, Managing Director at the Know Theatre. “However, this Festival was conceived over 18 months ago, when the Know Theatre was in a very different position and frankly had a staff that was larger by five.”

The second conception to take place in the coming weeks was planned to coincide with the production of Tony Kushner’s Angels in America: A Gay Fantasia on National Themes. The two-part play will take place as originally planned and run through May 8th.

“I’ve been looking at Know Theatre’s available resources, and while financial consideration is certainly one of the concerns, for me the most important thing is the preservation of our staff as a resource,” Vosmeier described. “We need to ensure the success of every single production we present. At this moment, that means that we’ll have to postpone the LGBT Arts Festival to ensure that we’re able to fully realize our production of Angels in America and the 7th Annual Cincinnati Fringe Festival.”

Staff at the Know Theatre note that a visual art exhibit of the LGBT Arts Festival will go forward as scheduled and will open at CS13 during Final Friday (map) on April 30, 2010. The exhibit will run through May 15 and feature work of prominent LGBT artists like Jan Wandrag, Gio Black Peter, Matthew Stradling, Zachari Logan, Scooter LaForge, Scott Hug, James Huctwith, Jeremiah Degrandpre, David DeWitt, and Matthew Dayler who is also serving as the curator for the exhibit.

As for the rest of the festival, Vosmeier stated that the plan now is to host the festival in October 2011 to coincide with National Coming Out Day on October 11th.

“I want to see a Festival that truly speaks to the LGBT community,” said Vosmeier. “This community is large and diverse with dramatically different economic, racial, educational, and political backgrounds. I want time to explore options, to collect ideas from the community and to seek out performers, artists, filmmakers who speak to that diversity.”