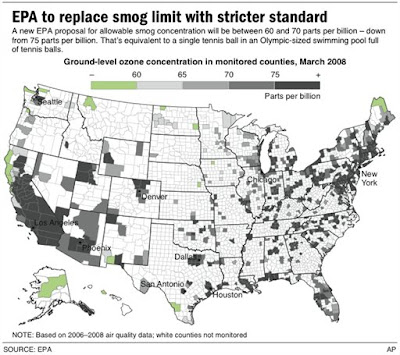 The Cincinnati-Hamilton Metropolitan Statistical Area has been recognized by the U.S. Environmental Protection Agency (EPA) for finally meeting 1997 federal air quality standards. The achievement by Hamilton, Butler, Clermont and Warren counties now puts all of Ohio in compliance with the 1997 federal ozone standard for the first time.

“Today we celebrate that the entire state of Ohio, for the first time, is meeting the 1997 ozone standard,” said Ohio EPA Director Chris Korleski. “Air quality in the Cincinnati area and throughout the state has improved, but our work is not done.”

The U.S. EPA first proposed the redesignation in March, 2010 that also included Dearborn County in Indiana. The Cincinnati MSA had to undergo air quality tests between 2007 and 2009, and prove it can maintain that status for 10 years in order to earn the redesignation from the U.S. EPA. But while all of Ohio and Cincinnati’s MSA are now meeting the 1997 standard, this is not the case for newly proposed ozone standards that are more stringent and will be enforced starting in 2011.