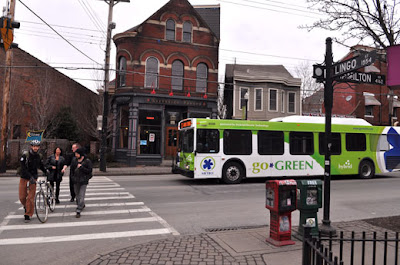 Today Northside residents and business owners will be gathering with bicycling advocates at Lingo Street and Hamilton Avenue to celebrate the installation of the region’s first on-street bike corral.

“Providing plenty of convenient and secure bicycle parking is a critical aspect of serving those who currently use bicycles for transportation and encouraging future cyclists,” said Michael Moore, Interim Director of the Department of Transportation & Engineering (DOTE).

In total the project cost about $1,000 and was managed by the City’s DOTE which has been aggressively implementing infrastructure improvements that make Cincinnati a more bicycle friendly city including new dedicated bike lanes, sharrows, trails and new bicycle parking requirements in parking garages.

Those interested in checking out the new bike corral are invited to join the Northside community, Cincinnati Bicycle/Pedestrian Advisory Committee (Bike/PAC), Queen City Bike and the Mobo Bicycle Coop at 6:30pm tonight at Lingo & Hamilton (map). Plenty of bicycle parking is available within the immediate vicinity, plus the site is served by Metro (plan your trip) and nearby automobile parking both on- and off-street.