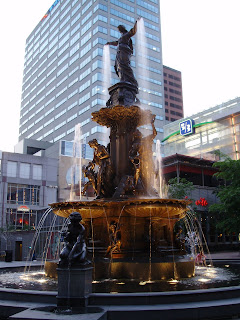 As required by Cincinnati’s City Charter, Mayor Mark Mallory delivered the annual State of the City address to an enthusiastic crowd at the Duke Energy Convention Center last evening. As the mayor described it, the annual speech serves as a “report on the state of affairs of this great city,” and a way to ask ourselves, “where are we?”

The mayor, whose presentation lasted just over an hour, spoke casually and extemporaneously, without a hand-held microphone and without the assistance of a teleprompter or a podium.

After highlighting recent accolades the city has received for being the fourth best city in the U.S. for college graduates and the ninth most literate city, the mayor warned against just perusing the top 10 lists to know where we stand. Instead, he called on us to examine our character as a city.

“We have to place public safety as our number one priority,” Mallory stated as he began his discussion on the character of a quality city. The mayor used the example of two public safety officials in attendance whose heroics demonstrated great character. Their bravery, the mayor advised, ought to inspire Cincinnatians to work for the city’s betterment in their own lives. “What are you willing to do,” he asked, “to make this community safer?”

Mayor Mallory then stepped aside to show what would be the first of five brief videos during the address. The video highlighted the work that Cincinnati Initiative to Reduce Violence (CIRV) has done to address public safety and described the successes of CIRV as an alternative to the narrow minded “throw away the key” mentality that often does little to reduce crime.

The mayor then turned his attention to the economy. “We cannot talk about building our economy without talking about jobs,” he proclaimed. Citing an increased focus on public/private partnerships, 5,000 new jobs were created, he declared. Furthermore, the mayor cited how investments in public infrastructure projects grow the economy by employing workers on the construction, but also by creating desirable, livable places for future business growth. In a moment of self-deprecation, the mayor informed the audience that while he is excited that The Banks project will be complete by Reds Opening Day 2012, he would definitely not be throwing out the first pitch.

In “an effort to help those in the region better manage their money,” Mayor Mallory announced the creation of Bank on Greater Cincinnati. The program is a collaboration with the regions eight largest banks, Cincinnati, Covington and Newport. Recent reports indicate that those who patronize businesses that offer services like pay day loans pay on average pay $900 per year in fees. Instead, the Mayor’s program will encourage citizens to “save and build wealth” with healthier financial practices.

Furthermore, the mayor commented that we as a city must invest in those large projects that work to responsibly grow the economy. He cited the Cincinnati Streetcar is one such project, as described in the second of the four short videos. The clip noted the proven economic impact of rail transportation, with a ratio of more than a 10 to 1 return on investment, and that the proposed streetcar route will connect the city’s two largest employment centers.

The mayor stepped aside a third time to show the winning video from a contest that the Young Professional’s Kitchen Cabinet (YPKC) hosted to showcase local civic pride. The neighborhood of Pleasant Ridge submitted the winning clip, which showcased the area’s vibrancy, safety and diversity.

“We need to do all that we can to be green,” Mallory opined, shifting focus once more. Doing so requires investments in the future, like the work the Office of Environmental Quality (OEC) is doing. They are installing a green roof on City Hall, a project paid for by the savings the city is seeing from making other facilities more efficient. Recently, the OEC was awarded $20 million in grants to fund city efficiency projects, and just yesterday, another $17 million in stimulus finding was awarded to Cincinnati to help perform energy efficiency retrofits.

Mayor Mallory praised the work the YPKC is doing to help in the city’s effort to be more environmentally aware. They created a civic garden in Over-the-Rhine, and produced an award-winning video to encouraging people to recycle.

After noting that the city’s rich cultural heritage has a “definite impact on our economy,” Mallory praised the economic impact of the Convention and Visitor’s Bureau (CVB). Their efforts bring thousands of visitors yearly who collectively spend millions of dollars in our local economy. The mayor showed the fifth video clip, a video that the CVB uses to promote the city and the region to prospective visitors like the estimated 200,000 people who will attend the World Choir Games in 2012, driving an economic impact of more than $13 million.

Mayor Mallory closed with an acknowledgment that as citizens, “we must be good stewards to this home we call Cincinnati.” In an effort to increase the value of the city for future occupiers of this space, the city is building the tallest building ever in Cincinnati, completing a stunning new mixed-use development at The Banks, opening a casino and linking them all together with a modern streetcar system.

Mayor Mallory’s “enthusiasm for the city is contagious,” observed Vice Mayor Qualls after the program ended. “His call for responsibility to move the city forward is welcome.” A recent Xavier graduate commented that the mayor seemed to be leading the city in a good direction, and that he seemed “more focused on the younger population” than others in the past. But perhaps CIRV’s Greg Baker summed the address up the best when he commented that it was a “grand slam in demonstrating what it means to be a great Cincinnatian.”