The update focused on Phase 1a of the construction plan, which includes 300 apartments and nearly 80,000 square feet of retail and restaurant space with parking garages below street level. As of this January, Phase 1a is 65% constructed and staying well within the budget previously set for the development.

Both the City of Cincinnati and Hamilton County have pledged monies towards The Banks. The City has pledged $20 million and has so far paid $7.5 million, while the county has committed some $5 million. After both the city and the county have paid their committed shares, they will split the remaining cost 50/50.

Phase 1a of The Banks is projected to open by Opening Day 2011. According to the presenters, apartment leasing will begin in fall of 2010, though the projected price points of said apartments are still up in the air. As soon as the exterior facades on the buildings are finished, the streets that are currently closed off due to construction will reopen. 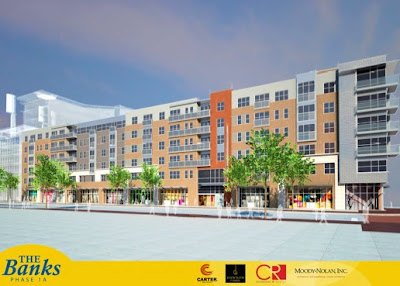 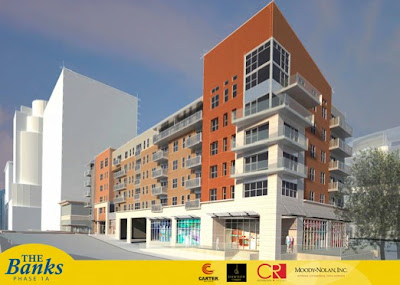 Construction has begun on 300 apartments and 80,000 square feet of retail at Phase 1a of The Banks – Images Provided

The scope of construction that has been most recently completed is mostly structure for parking and mechanical, electrical and plumbing infrastructure. They are currently laying shear walls and columns in the south site by the bridge. The workers are waiting for warmer weather to come back in order to pour more concrete.

One of the financial directors gave an update on the amount of local, small business, minority and women employees and businesses currently engaged in the Banks project. She emphasized that 74% of construction workers for the project currently live in the Cincinnati metropolitan area, 20% are minorities, and 2.5% are female. Council members Charlie Winburn, Laure Quinlivan and committee chair Chris Bortz expressed concern for making sure that “as many Cincinnatians as possibly are involved in the construction and in the business of the Banks.” Winburn stressed making sure that “this project has the utmost integrity” when it comes to keeping money local, (despite hiring out of Birmingham for the general contractors). 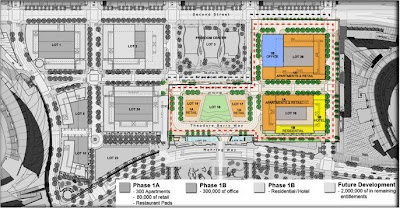 Phase 1a site plan for The Banks – Image Provided

After Phase 1a is complete in early 2011, work will begin on reconstructing Mehring Way to cut a wider arc above the river, bordering the new Central Riverfront Park. As a result, project managers are currently in the process of appropriating stimulus funds for this development.

While retailers for the Phase 1a portion of the project are not yet set in stone, much has been speculated about a potential grocery store, entertainment venues like an ESPN Zone, and other restaurants, bars and entertainment venues to compliment the evolving riverfront district. Connectivity to the existing Riverfront Transit Center, and proposed Cincinnati Streetcar, will help connect The Banks to the rest of Downtown, Over-the-Rhine, and Uptown neighborhoods resulting in a live/play/work situation that will be attractive to all.