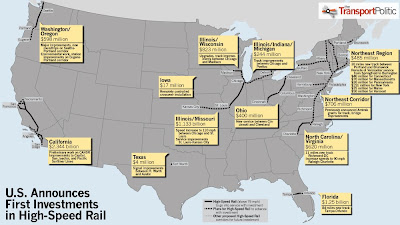 The winners have been chosen, and Ohio’s efforts to land money for rail service along the Cincinnati-Columbus-Cleveland (3-C) Corridor have been successful. Today it has been announced that Ohio will receive $400 million for track upgrades, grade crossings, new stations, and maintenance facilities.

Meanwhile the larger Midwest region pulled in a collective $2.6 billion which was second only to the West Coast region which nabbed an impressive $2.942 billion of the total $8 billion available. Secretary of Transportation, Ray LaHood, views this as an investment that will make passenger rail more efficient while also providing better service in travel markets across the nation.

For Cincinnati there are still questions though about a station location. The $400 million is a significant investment, but will still not enough to cover the $517.6 million needed to extend the line through one of the nation’s most heavily congested rail yards to Union Terminal. Additional track to run the line all the way to Lunken Airport might also prove be to costly according to project officials.

Ken Prendergast, executive director of All Aboard Ohio, responded to those questions by saying, “The state could trim costs by using rebuilt, rather than new, passenger cars and by ending the route in Sharonville rather than at Lunken Field, and when there is enough money run trains to Union Terminal.”

The 250-mile 3-C Corridor has long been seen as one of the nation’s most promising rail corridors with projections estimating that 478,000 passengers will use the rail service annually. The new service will operate three daily round trips with top speeds of 79mph and serve a population of more than 6.8 million people, close to 40 colleges and universities, and 22 Fortune 500 companies.