Last week the city of Cincinnati announced changes to its current curbside recycling program. Members of City Council, Mayor Mallory and representatives from Rumpke and the Office of Environmental Quality gathered at the original LaRosa’s pizza location on Boudinot Avenue to make their announcement. In partnership with Rumpke Recycling, the City will now collect more items than ever before including all plastic bottle types (still no lids), jugs and pizza boxes (no leftover pepperoni or banana peppers please). Additionally, households can put out multiple recycling bins if their recycling needs exceeds the single green bin. 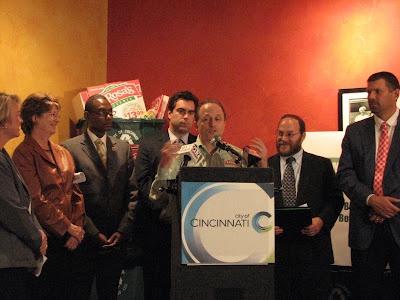 Please be sure to rinse out and dry all jars, jugs and bottles before placing them in your bin. Bottle caps are not currently accepted in the City recycling program, however, plastic lids (i.e. milk jugs) can be taken to any Aveda Institute for recycling. Metal lids (i.e. spaghetti sauce jars) can be recycled at any scrap dealer in the area who accepts steel.

For those residents who do not currently have curbside recycling services (households who have private trash service dumpsters) can collect their recyclables and take them to various recycling drop off locations around the city. Signage at the drop off centers will be updated within the next few weeks to reflect the changes in materials accepted.

Rumpke has not expanded these changes to the entirety of its service area. These changes are only reflected for the City of Cincinnati. According to Sue Magness from the Office of Environmental Quality, “Technically, the new sorting facility is still under construction and they are temporarily warehousing the materials. So Rumpke will expand as new contracts are established (as in the case of the City), or after the installation of the “state of the art” equipment is complete.”

The announcement comes on the heels of tumultuous budget discussions that backtracked on a funding promise that would have provided new larger recycling carts for Cincinnatians and gotten the city started with a RecycleBank program that rewards users for the amount they recycle. Those upgrades to the City’s recycling program would have paid for themselves almost immediately through the higher payments the City would have received from Rumpke Recycling for higher recycling volumes.