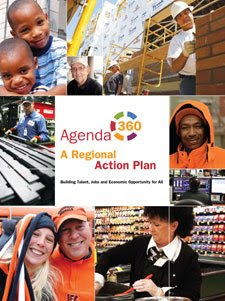 On February 13, Agenda 360, a regional action plan, announced its goals, priorities and strategies for southwestern Ohio including Cincinnati. The event was attended by more than 150 volunteers, government officials, business and civic leaders.

Agenda 360 is an action-oriented plan that desires a sweeping change for the region by the year 2020, in which the metropolitan area leads the nation in retaining and attracting talent, jobs and economic opportunity and development. It’s goals by the year 2020 include,

With this, Agenda 360 has set some lofty goals, but it is not without some guidance. In the fall of 2006, about 50 local civic leaders and officials journeyed to Boston to see how they had improved on some of their lingering issues for their region. What they discovered is that the issues that plagued the Boston metropolitan area were the same issues that plagued Cincinnati’. Except that Boston had set a basic list of priorities towards improving the city that were paying out dividends, so to speak.

In early 2007, Agenda 360 was launched using Northern Kentucky’s Vision 2015 growth plan as a model. A group of leaders from more than 30 organizations, including heads of labor unions, business groups, social service agencies and public officials, created a framework for tackling the lingering, difficult issues that face southwest Ohio. It partnered with the United Way State of the Community Report, so that poverty levels, educational attainment and health status, for instance, could be closely monitored and tracked – giving Agenda 360 a level of accountability.

Over 7,000 responded to the initial Agenda 360 Community Survey. In the survey, it found,

I’ll leave UrbanCincy readers with some quotes that were part of the responses in the initial Agenda 360 surveys,

“Cincinnati is a city with a lot of untapped potential. It is full of beautiful spaces and creative and powerful minds, but there needs to be a place where all this meets up.”

“Please don’t spend 20 years discussing how to do it! Let’s get started with baby steps as soon as possible and keep everyone involved in the bigger vision.”

“Historically, Cincinnati has been slow to respond to a changing social and political environment. This kind of a visioning project is necessary to allow the region to properly prepare itself for the future.”