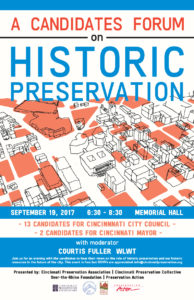 Cincinnati has moved forward with modifications to its city regulations to allow greater flexibility with regard to the provision of parking, incentivized dense development near streetcar stops, and has pursued an agenda under Mayor Mark Mallory (D) that has been focused on making the city more livable and attractive.

“Transit Oriented Development is a powerful strategy that can help communities throughout the Cincinnati region encourage new development projects,” Mayor Mallory stated in a prepared release. “It has become clear that there is increasing demand to live near community assets. By making smart transportation decisions, communities provide an incentive to private investment.” Calhoun Street in Clifton Heights has been transformed from drive-thru fast food restaurants to a dense collection of shops, residences and offices. Photograph by Randy Simes for UrbanCincy.

One of the principle elements of this agenda has been to make the city more attractive to those who do not own personal automobiles, and by making the city’s neighborhoods more walkable and better connected to one another through transit.

Encouraging real estate development that works with these goals, however, is one that is still in its infancy stages and is still in need of work with local developers.

Transit Oriented Development (TOD) is a catch phrase that has been embraced by Smart Growth America, a national organization advocating for smart growth strategies, and is part of a series of meetings to be held in Cincinnati on September 26 and 27.

Organizers say that the workshops will be led by experts from Smart Growth America and aim to inform residents and community leaders about the benefits of transit and development surrounding transit.

“This workshop will provide the community with an opportunity to learn more about transit options and transit-oriented development in the context of Cincinnati,” said Roger Millar, Smart Growth America Vice President. “Since the city recently passed its comprehensive plan, now is a great time to assess how Cincinnati can most effectively align its development with transit investments.”

The meetings are being jointly hosted by Mayor Mallory and Agenda 360, a regional action plan for Cincinnati, and are free and open to the public.

An introductory presentation will occur at 6pm on September 26 at the Cincinnati Area Chapter of the American Red Cross in Evanston (map). The presentation, organizers say, will focus on a collection of strategies for implementing TOD in Cincinnati neighborhoods and surrounding communities.

While ongoing sequestration has limited the federal governments ability to allocate much needed funding for the nations ailing infrastructure, the Obama administration rolled out a report touting the success of its Strong Cities, Strong Communities (SC2) program. The program allocates funding to local governments by taking a holistic approach to the impacts of local development projects. The program, which can take on a multitude of urban issues however remains woefully underfunded. More from NextCity:

What Landrieu is diplomatically saying is that the federal government sometimes needed SC2 to shake money loose from its own agencies. That may sound absurd, but integrating the different programs so that each could try to make sure cities have jobs, affordable housing and safe mobility was a new goal when the Obama administration took office and starting pursuing it. The report demonstrates that SC2 is working at its primary goal of helping a handful of cities with some discrete projects.