When discussing transit issues with people who oppose transit you often hear the statement that they’re not against transit necessarily, they just don’t like the proposed plan that you’re discussing. It’s odd, because there never seems to be a plan that these people like.

In 2002, the regional transit plan was too big for COAST’s liking, while the current streetcar proposal is too small. COAST also argues that the proposed modern streetcar (video) is in fact outdated technology since two other American cities currently have it (Portland, Seattle). After hearing these arguments I have repeatedly asked for an alternative proposal of something COAST would support.

Finally Mark Miller let me in on the “latest technology” for mass transit – low-level buses that have an overhead electric power source. The response seemed shocking given the discussion was surrounding a Midwest Regional Rail plan that Cincinnati could be left off. Also shocking was the identification of an electric-powered bus as being the “latest technology” in transit. 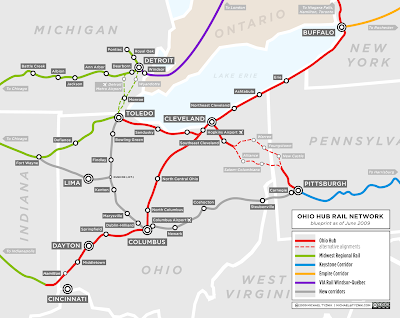 The Ohio Hub portion of the larger Midwest Regional Rail Plan that would connect the Midwest’s population and job centers with high-speed rail service. COAST’s Anti-Passenger Rail Amendment would prevent Cincinnati from investing in “passenger rail transportation” without first getting voter approval – a process that would leave Cincinnati out of the funding loop and off of the regional rail network.

Miller did not identify MagLev’s 300+ mph Transrapid train (video) that utilizes magnetic propulsion to avoid friction resistance and attain higher speeds, or the enhanced MagLev systems that could travel within a vacuum tube (air-less) thus avoiding the sonic boom that would come with speeds in five to six times faster than the speed of sound. A “vactrain” would be able to travel at speeds of 4,000-5,000mph at-grade and in normal conditions due to the lack of air resistance. Such a system could take passengers from New York City to London, Brussels, or Paris in about an hour, and would cost less than what the U.S. Government has recently spent to bail out our financial sector. 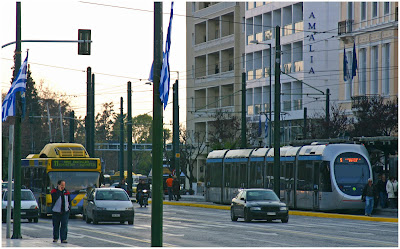 Buses powered by overhead electric wires run all throughout Athens, Greece. Here one of those buses is running next to a modern tram at a station near Syntagma Square.

Miller went on to clarify what he was describing with an example from Lyon, France. These buses with modern designs are sleek and are powered by electricity like modern streetcar systems, but that is where the similarities end. They still have lower capacities (unless COAST is also advocating for articulated buses), have higher maintenance costs/shorter life spans, and should be used differently in an overall transportation system hierarchy.

Modern streetcar systems aren’t pursued because they somehow represent a fascination for trains and their modern designs. Modern streetcar systems are pursued because they are the best localized transit network for cities. They run smoothly, are ADA compliant, move people very efficiently, they’re durable, produce no pollution in the direct surroundings, and they’re proven to work.

I think Cincinnati is a world-class city, and that it deserves the best. And if COAST wants to advocate for a retooled bus system that operates with an overhead electric power source then great. I will be right there to help them push for an improved bus system, but for some reason I don’t think that COAST will be so jazzed about spending money on articulated buses, real-time arrival GPS systems, overhead electric power feeds, new bus rolling stock that can utilize said power source, or dedicated right-of-way for these new and improved buses.

The Cincinnati, Lebanon and Northern Railway (CL&N) is a defunct railroad in southwest Ohio, connecting Cincinnati to Dayton via Lebanon. Chartered by the city of Lebanon in 1850, the original incarnation of the Cincinnati, Lebanon and Xenia Railroad was to create a railroad between the namesake cities, bypassing the Little Miami Railroad — today’s Little Miami Rail Trail. It would give Lebanon a railroad connection to industry and it was hoped that it would entice industry to move further inland, away from Cincinnati.

The railroad changed hands over the years due to bankruptcies, becoming the Miami Valley, Cincinnati Northern, and later the Cincinnati, Lebanon and Northern. A branch was constructed to Montgomery, and a connection was made to the Spring Grove, Avondale and Cincinnati Railway, which made it only as far as to Avondale due to financial issues. At one point, a 10,000-foot tunnel was planned under the Deer Creek Valley, to give a more gentle grade for the climb out of downtown Cincinnati to Norwood. Only five brief sections were completed.

Controversies surrounded the railroad. During construction of the 1,050-foot Deer Creek Tunnel in the early 1800s, debris from blasting launched projectiles throughout the Walnut Hills neighborhood, killing several workers and pedestrians. Various residences were heavily damaged or destroyed. It’s Court Street terminus also fueled much debate, due to the city of Cincinnati refusing the railroad passage over Court Street to a connection with Fountain Square via an elevated line. The city feared that an air brake on a train could fail and cause catastrophic damage.

Towards the mid-20th century, the railroad went into decline. The rail line north of Lebanon was discontinued in 1952, and so began a series of station closures and branch abandonments. The Court Street Depot was closed in 1969 and torn down in 1975, which coincided with the dismantlement of tracks north of downtown to Norwood. An uptick in freight traffic in the vicinity of Mason, and the designation of some sections as Light Density Lines, kept some of the former CL&N in operation.

In 1985, former CL&N trackage from Hageman to Lebanon was purchased by the city of Lebanon, and themed tourist trains began rolling on the then-named Turtle Creek Valley Railway. It was later purchased by several investors and re-christened the Lebanon, Mason and Monroe Railroad (LM&M), which has been successful to this day.

Today, much of the original CL&N remains abandoned or lightly used. While the LM&M operate over some of the original railroad, others are being considered for reuse, identified in the Interstate 71 Corridor Transportation Study and MetroMoves Regional Transit Plan. One can only hope that Cincinnati and Hamilton County will take advantage of this already identifiable rail corridor for future inclusion into a regional transit network, and make the most use out of existing infrastructure that is in place.