In New York City, the transportation department there is working aggressively to add separated bike lanes along central medians. These dedicated lanes offer two separate lanes – one for each direction of bicycle traffic. At the same time public officials are looking to plant more trees and install additional benches and garden areas within those median spaces. 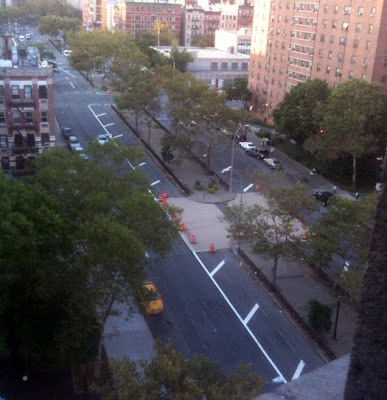 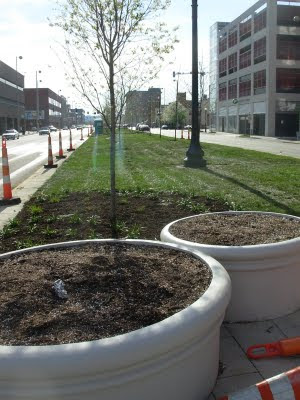 LEFT: Pike Street in NYC being equipped with bicycle lanes, plaza spaces, and has preserved its trees (Photo from StreetsBlog). RIGHT: Central Parkway in Cincinnati’s downtown was recently redone with new trees, wider medians, planters, new lighting, and plenty of grass to go around (Photo from Queen City Survey).

There is a problem though. City transportation officials have cited the parkway design standards that are in place as a hurdle towards incorporating dedicated bike lanes than are physically separated from vehicular traffic. The current standards along Central Parkway call for a double row of trees along the parkway to maintain that beautiful tree cover. These standards did not apply to the recent improvements made along Central Parkway through Downtown – a project that could have easily included these dedicated lanes in addition to the trees, lighting, and other landscaping that was incorporated there.

While avoiding getting into the dirty engineering requirements for roadway design, more needs to be done to work with bicyclists and pedestrians in creating more hospitable public thoroughfares for more than just automobiles. In this case the trees probably could be preserved while also creating physically separated bike lanes. In one of the most densely populated and space-cramped cities in the world, New York City is not only providing physically separated bike lanes for each direction of bike traffic, but they’re planting more trees, adding more benches and making better use of their space.

Arguably the greatest tennis player of all time, and the current world #1 Roger Federer just won his 16th Masters event in Cincinnati today over world #4 Novak Djokovic in straight sets (6-1, 7-5). Sold out crowds greeted the top players in the world all week long in one of the oldest and most prestigious tennis tournaments in the world.

The Western & Southern Financial Group Masters sets the stage for the biggest tournament in the world, the US Open, that will start August 31 and run through September 13 in New York. If the international competition doesn’t get you jazzed up, then maybe the 23,200 fans at Arthur Ashe Stadium will.

A few weeks back, I wrote about a brand new park in New York City called the High Line. It is a converted elevated railway line that they turned into a park.

Pepsi has apparently decided to use this park as one of the faces of the Good Works portion of their Refresh Everything campaign. Seems fitting enough. Think they’d be willing to finance help any refreshing projects here in the 513? The Cincinnati Streetcar maybe? I’d be willing to let them poster one of the streetcars with a gigantic Pepsi logo on it, for the right price. Not that I make those calls. Or maybe they could do something to refresh the failure know as the Skywalk.

Below, see a short video on how the park interfaces with the existing infrastructure.

The Summer Streets program in NYC temporarily closes down streets to automobiles. The program will be expanded this year to 14 locations across all five boroughs and will look to expand upon the estimated 50,000 people that enjoyed the program last year.

Check out this great video from Streetfilms.

Suspended two stories above Manhattan’s West Side lies an urban oasis, the High Line. The New York City Department of Parks and Recreation turned an unused elevated train track into the city’s newest park. Originally designed in the 1930’s to elevate freight away from pedestrian traffic, the elevated tracks now serve as the foundation for a pedestrian-only park. 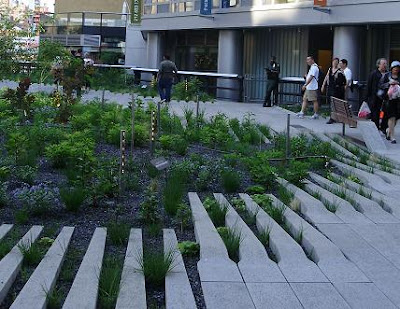 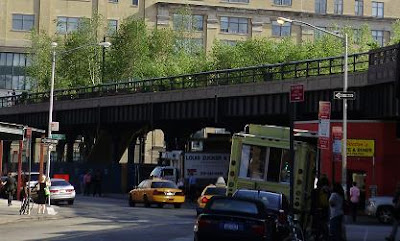 When the High Line’s first section opened on Tuesday, June 9, 2009, it was the first half-mile of what will ultimately be a mile and a half long park. Designed by landscape architects James Corner Field Operations and architects Diller Scofidio + Renfro, the park features several species of grasses, flowers, and trees that intermingle almost seamlessly at points with the concrete walkways.

Some sections include the original railroad lines embedded into the plantings as a reminder of the original function of the elevated path. Other parts use those lines as the foundation for rolling lounge chairs.

Designers also seem to have taken into account the green possibilities of managing water in the park. Drinking fountains placed intermittently allow water runoff to hydrate the plants directly. Additionally, portions of the walkway are intentionally pitched so that rainwater is redirected into the plants. 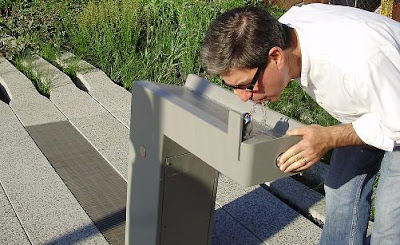 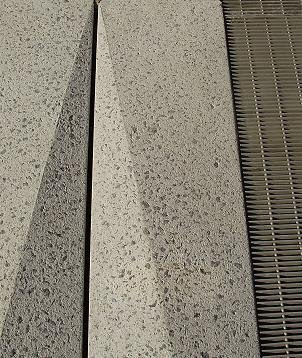 Managing water runoff accomplishes two goals. First, redirecting excess water to the plants reduces or eliminates the need for irrigation, saving water and ultimately saving the tax payer from funding the infrastructure and the maintenance cost of watering the plants. Second, diverting rainwater reduces stress on the sewer system because the water is absorbed by the dirt. From there, it is naturally filtered before it makes its way into the plants or evaporates. In the event of heavy rain, this process still works to slow the water down and filter it before it enters the sewer.

The high line demonstrates that urban livability and the outdated infrastructure need not stand in opposition. Its inception also speaks to the myriad of possibilities Cincinnati has for recreating urban vitality through re-imagining the space around us. Anyone have any ideas for Cincinnati’s skywalk system, the mistake that was the 71/75 corridor bisecting downtown, or anything else around town? 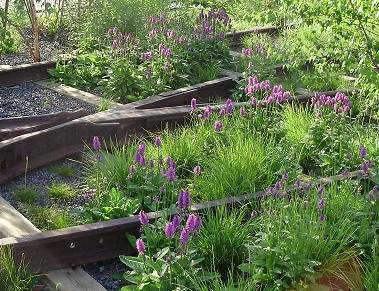 I’ve also got a ton more pics. Let me know if you want to see them.