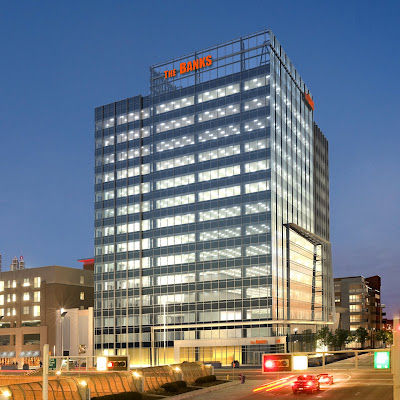 The progress being made at The Banks development along the Ohio River in downtown Cincinnati is palpable. Underground parking garages have been built to lift the development out of the 100-year flood plain and provide parking spaces for those living, working and visiting Cincinnati’s central riverfront. With that complete, the buildings that will house 300 apartments, retail and office space are now rising on the eastern portion of the site near Great American Ball Park.

The development team responsible for the $600 million private investment has now released a new website, updated renderings for Phase 1 of the project and has begun a branding and marketing campaign intended to “define and illustrate” what it will be like to live, work and play at The Banks. The new campaign focuses around a slogan of “It’s happening on the river” and includes a new logo in addition to the new website and marketing effort.

“I think after all these years, it’s hard for people to believe that things are finally happening at The Banks,” said Malloy Peterson, vice president of marketing at Carter. “This campaign, along with the ongoing construction now visible at the site, will help change that perception and start to build interest among the community that The Banks is really taking shape.”

The updated renderings illustrate the large sidewalks that will accommodate the many visitors and residents of the mixed-use development. The mid- and high-rise structures will include street-level retail that has apartments with balconies or office space on the upper floors. “Throughout all aspects of this project, we’ve been steadfast in delivering a development that creates excitement and interest throughout Greater Cincinnati,” said Harold A. Dawson, Jr., president and chief executive officer for The Dawson Company. “With a grand opening a year away, this new campaign brings to life our team’s vision of The Banks.”

Those interested in living at one of the 300 apartments in Phase 1 of The Banks can now contact Kristi Fickert from Village Green Management at (888) 371-7241 or by email at liveatthebanks@villagegreen.com.

Both the private and public portions of the overall development are currently on-schedule, and will see the underground parking garage to the east of the National Underground Railroad Freedom Center open this June 2010, with a grand opening of the private development portion scheduled for spring 2011. Once fully built-out, The Banks development will house more than 3,000 new residents and will be Cincinnati’s largest single, mixed-use development composed of residential, office, hotel and retail components.