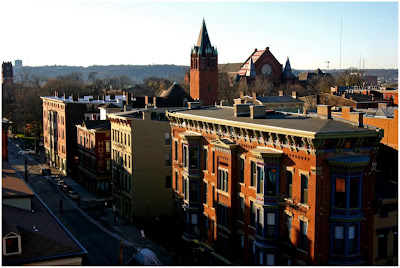 The City of Cincinnati will present its recommended strategy for implementing form-based codes at a special Planning Commission meeting on Friday, April 30 at 9am.

Form-based codes are two years in the making in Cincinnati where officials have met with communities around the country that have successfully implemented form-based codes of their own. Locally, the City of Bellevue, KY has finished the public involvement portion of their form-based code development process and is now moving towards adoption of the non-conventional zoning practice.

Cincinnati’s implementation strategy will detail how form-based codes can be incorporated into the existing Cincinnati zoning code while also developing a process for creating and applying them throughout city neighborhoods.

This strategy has been developed through a collaborative effort between the City, Opitcos Design and Lisa Wise Consulting over the past four months. In 2008, Vice Mayor Roxanne Qualls and Councilmember Laketa Cole introduced a motion directing the administration to develop such a plan. Stakeholders have been meeting month since that time and are now getting closer to implementing a form-based code in one of the largest cities nationwide to date.