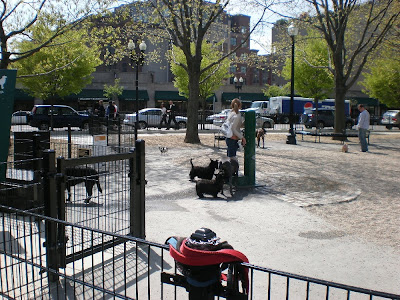 Residents of Covington’s historic MainStrasse Village are yearning for a dog park that will provide another amenity in their neighborhood. Dog parks have become highly sought after by urban dwellers as city living becomes increasingly more attractive.

In Cincinnati, early efforts were stalled for a dog park downtown due to the lack of capital money to build the park. The efforts to create a downtown dog park yielded fruit earlier this year when Procter & Gamble’s Pet Care division announced that it would contribute $50,000 towards the construction of a dog park on a half-acre piece of land on the eastern edge of downtown Cincinnati. Planners have also included a dog park in Washington Park’s redesign that is to be reconstructed over the next year in historic Over-the-Rhine.

Dog park supporters in Covington will meet on Thursday, April 29 at 5:30pm on the second floor of Chez Nora (map). Those in attendance will hear from Tom Biedenhorn who was instrumental in making the Pioneer Paw Park reality. Biedenhorn will be joined by Covington Commissioner Sherry Carran who did the site design for the Pioneer Paw Park, and will share information from that project with the audience.