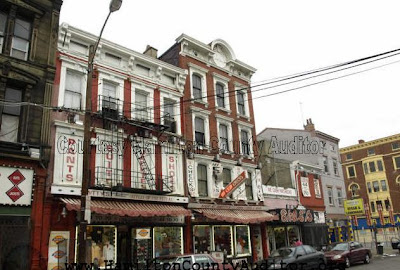 Early yesterday morning several buildings in the 1400 block of Vine Street were badly damaged by fire. The collection of buildings included the long-standing Smitty’s clothing store and several apartments above where the residents lost just about everything.

The risk now is losing additional historic structures in one of the most at-risk and important historic districts in the nation. One building was already demolished yesterday following the fire clean up, and others are scheduled to be demolished today – including the building that houses Smitty’s.

The Over-the-Rhine Foundation is asking residents to call Amit Ghosh (513-352-3433) from the City of Cincinnati immediately and ask that these buildings not be torn down, and instead be examined to see if they could be saved.

Danny Klinger, known for helping save the historic Meiner Flats building down the street recently, states that the City is required by ordinance to first attempt to preserve these buildings rather than demolishing them.

In historic districts, the administration will encourage the use of demolition funds to repair buildings rather than demolish them. At the very least, repair of a building will be funded for the same amount that it would cost to demolish the building.

“The City is ignoring its own laws by going straight for the demolition option rather than at least considering using the demo money to preserve these structures,” Klinger implored. “Mr. Ghosh and his department must understand that those of us who care about preservation and about OTR are not ok with this. We expect that preservation be given full consideration.”

UPDATE: Danny Klingler has just confirmed that the City has backed off of demolishing the remaining two structures for now, but he encourages everyone to continue to call to inform the City on their stance on preserving Over-the-Rhine’s historic building stock, and to thank them for saving these structures for now.