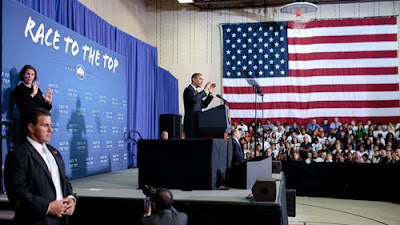 The nation’s first public Montessori high school is a feather in the cap of Cincinnati Public School District, and Clark Montessori is also one of the best schools in Ohio’s third largest public school district by student population. The school has now gone even further and been recognized on a national level as a model of educational success for other high schools across the United States.

This accomplishment has not gone unnoticed by President Obama who has established a goal of having the world’s highest proportion of college graduates by 2020. As part of President Obama’s education goals, he has established the Race to the Top High School Commencement Challenge which has been whittled down to six finalists including Cincinnati’s Clark Montessori.

“These six schools represent just a few of the stories of success that are happening all across the country,” said Secretary of Education Arne Duncan. “We won’t accomplish the President’s national goal of leading the world in college completion by 2020 without the hard work and dedication of the school leaders, teachers and students exemplified by our six final high schools.”

To get to this point, Clark Montessori seniors worked with representatives from the Get Schooled Foundation to produce a video illustrating the excellence at their school. The video is currently being used as a judge for those voting for a winner from the six finalists. Starting today, voting opened to the public and Clark Montessori’s application and video have been posted to the White House website. The winner of the competition will receive a visit from President Obama where he will deliver the spring commencement speech at the winning high school.

“The quality of the applications we received is a testament to the exciting work happening in schools throughout the country, and I look forward to visiting and speaking at the winning school later this spring,” said President Obama.

In 2009, Clark Montessori graduated 100% of its senior class. You can vote for Cincinnati’s Clark Montessori in the Race to the Top High School Commencement Challenge now until 11:59pm on Thursday, April 29.