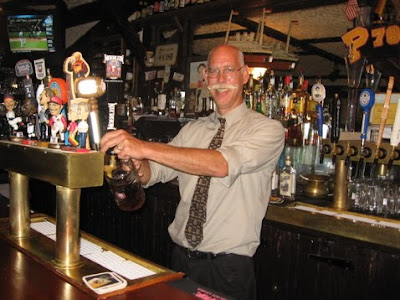 There are many things to get excited about when it comes to Bockfest that go beyond the wonderful, oh so wonderful, beer. Some of that excitement should revolve around the many great events and features of the celebration this weekend. While Bockfest truly does not start until Friday evening, things get an early start today. Take a look a UrbanCincy’s Bockfest celebration picks below to start planning out your Bockfest lineup.

Mecklenberg Gardens – Tonight, March 3, Cincinnati landmark Mecklenburg Gardens will be hosting the tapping of Hudepohl Bock & Schoenling Bock starting at 5PM. The event is free and open to the public as some lucky folks will be able to get the first few drinks of Hudepohl Bock, the 2009 Bockfest homebrew winner, and Schoenling Bock which returns after nearly a 25 year absence.

Bockfest Parade – The annual Bockfest Parade rolls through the streets of Downtown and historic Over-the-Rhine on Friday evening to officially kick off the weekend’s festivities. The parade will start in front of Arnold’s Bar & Grill at 5:30pm and will head north along Main Street through OTR. You can either watch the parade from along the route or join in as it requires no advance sign up.

Bock Beer – Bock Beer is a centuries old tradition dating back to 14th Century monks that brewed it during Lent while they fasted. It is always a sign of the coming spring and does pack a potent punch. There will be no shortage of Bock beers to try over the weekend including many offerings from Greg Hardman and our friends at Christian Moerlein.

Bockfest Hall – Every year Bockfest Hall is the cornerstone of the festival and this year is no exception. The one thing that is different this year though is that Bockfest Hall is part of what was the historic Kauffmann Brewery near Vine & Liberty streets (map) in Over-the-Rhine. Be a part of history and have a beer in an old Cincinnati brewery that is also rumored for “big” news in the near future.

Arnold’s – Cincinnati’s oldest continually operating tavern, Arnold’s, will be playing host to entertainment through the weekend, has a special Bockfest menu that is definitely worth checking out, and will feature six Bock beers on tap, the most of any Bockfest establishment.

Free Shuttle – Bockfest Hall & Arnolds are only two of the participating venues at Bockfest, and all weekend a free shuttle (see map above) will run between all of the participating Bockfest establishments. Not only is this beneficial because it gives you access to many venues around the area, but it works great as you can park near any establishment and hop on the shuttle for the night (sounds a little familiar to something else being proposed).

Great Local Music – Great music occurs all weekend long at the participating Bockfest venues, but the one can’t miss act has to be local favorite Jake Speed & the Freddies who will be playing their Cincinnati flavored tunes at Bockfest Hall on Friday evening. Here are the rest of the Friday, Saturday, and Sunday events and bands that can be found at any one of the 13 participating venues.

Great Cincinnati Food – While the 14th Century monks may have brewed Bock beer because they were fasting during lent, you won’t have to. Food can be had at the many fine establishments as well as Bockfest Hall which will feature German food from Mecklenburg Gardens and waffles from Taste of Belgium.

Hudy Bock & the Homebrew Contest – This event, brings together home brewers from around the city to compete in a contest to see who makes the best Bock beer. While many varieties will be judged, the winner of the Traditional Bock category will be honored by Christian Moerlein who will use the recipe for the 2011 version of Hudepohl Bock. The competition starts at noon on Saturday at Bockfest Hall. 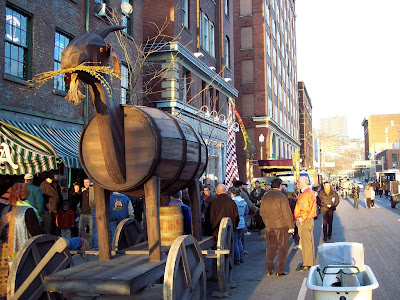 The annual Bockfest Parade kicks off the weekend of festivities Friday at 5:30pm – photo by SlimWhitman.

“Little Kings” Sausage Queen Finals – To be held at Bockfest Hall on Saturday evening at 8pm this event is not to be missed as the Sausage Queen of the festival will be crowned. The road to becoming the Sausage Queen includes making it through preliminary rounds that have been held over the last few weeks and is a high honor for whomever is wins the crown. The contest has become legendary and is always lots of fun.

Historic Church Tour – New to Bockfest this year is the Sunday afternoon Historic Church Tour of six of Cincinnati’s most historic churches located in Over-the-Rhine. The tour starts at 2pm and is scheduled to last for two hours. The price of admission to the tour is $20 and includes drink tickets for Bockfest Hall.

Regardless of how much time you spend at Bockfest, it looks to be a great weekend. Temperatures look to be in the mid to upper 40’s with clear skies. There will always be something happening, and with the free shuttle getting from place to place should be very easy. So take the time to come have some fun and support Cincinnati’s rich brewing history and the time old tradition of the coming of spring with Bockfest 2010.

Photo of Tom Hartman at Mecklenberg Gardens from BuyCincy.