The University of Cincinnati has been awarded nearly $8.5 million by the National Center for Research Resources (NCRR) for the repair, renovation, and modernization of existing research facilities in uptown Cincinnati.

In 2003, then University of Cincinnati president Dr. Nancy Zimpher championed UC|21 – a comprehensive academic planning process that would help lead UC into the 21st Century. Among UC|21’s six primary goals, Goal 2 was to “grow our research excellence” by building on the university’s greatness as a major research university.

The goal was taken even further by Dr. Zimpher who often said she intended on making the University of Cincinnati the nation’s premier urban research institution. 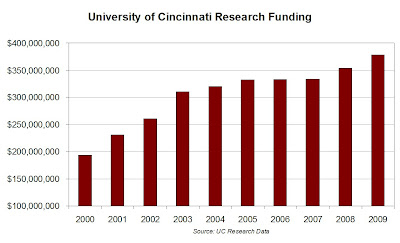 In 2009, the University of Cincinnati generated $378 million in research funding compared with $194 million in 2000, just before the start of UC|21, representing a 95 percent increase in research funding over a ten year period. Announced by the U.S. Department of Health & Human Services (HHS), the nearly $8.5 million grant will be issued tomorrow on March 4, 2010 and remain active for five years after its activation.

“This is great news for the University of Cincinnati,” said U.S. Representative Steve Driehaus (D-OH). “UC carries out cutting-edge research in a wide range of fields, and this investment will help ensure the university can continue its important work.”