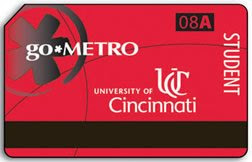 UC students, faculty, and staff will soon pay more to participate in the UC*Metro program. When originally created, the deal allowed free rides on any Metro bus route by simply showing your UC ID card. In September, we reported that riders must now pay a quarterly fee ($40 for students, $120 for faculty and staff), and pay an additional fare for routes outside of Zone 1.

Due to an increasingly tight budget situation at Metro, which has required a combination of service cuts and fare hikes, the UC*Metro deal will see additional changes. In addition to paying for the quarterly card, riders must now pay a 25¢ fare for routes within Zone 1 (formerly free), and increased fares in other zones (see full list of fares at UC’s website).

The new fares will take affect on December 27. Those who have already purchased a pass for Winter Quarter have been given the option of requesting a refund, from now until January 11, 2010, by e-mailing Marie Sutthoff at marie.sutthoff@uc.edu or calling 513-556-4319.