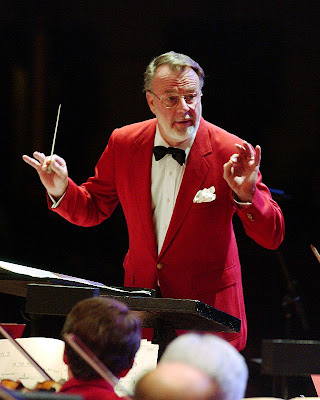 Kunzel’s dream was to locate the School for Creative and Performing Arts (SCPA) in Cincinnati in the Over-the-Rhine district just a block or so from Music Hall. In addition to this, he helped raise funds for this endeavor. Unfortunately, Erich Kunzel recently passed away as a result of cancer and will not see his dream soon come to fruition.

Many sought to honor him for all he did for the city of Cincinnati and the world of music. So, the street in front of Music Hall was given the additional name of “Erich Kunzel Way” by the Cincinnati City Council, while at the same time retaining its name as Elm Street.

An additional honor was sought by many to name the SCPA School after him, with the final result that the building complex of the school will be named the Erich Kunzel Center for Arts & Education.

As President of the German-American Citizens League of Greater Cincinnati, I appeared at the November meeting of the Cincinnati School Board, stating:

“Maestro Kunzel’s efforts not only spearheaded financial support for the construction of SCPA, but they also led to its location in downtown Cincinnati near Music Hall in historic Over-the-Rhine, the home of his beloved Pops Orchestra.”

Kunzel was a good friend of the German-American community and proud of his German heritage. Although it was hoped that the new school would bear his name, the compromise reached does place his name on the building complex in Over-the-Rhine and most likely will become generally known as the Erich Kunzel Center for Arts and Education.

German-Americans in Cincinnati, therefore, can be proud to have done their part in obtaining this honor for Maestro Kunzel, a great German-American, who was well known throughout the world.

A collection of his recordings was just issued entitled “Erich Kunzel – Cincinnati Pops Orchestra: The Legacy Collection.” It contains a selection of fifteen of his favorite musical pieces, concluding with “Stars & Stripes Forever,” by John Philip Sousa, who also was of German descent.

Don Heinrich Tolzmann serves as president of the German-American Citizens League of Greater Cincinnati & Curator of the German Heritage Museum. The author of many books on Cincinnati’s German heritage, he also is Associate Publisher and Columnist for Germerica.net. His forthcoming book due this spring is on Cincinnati’s historic Over-the-Rhine.