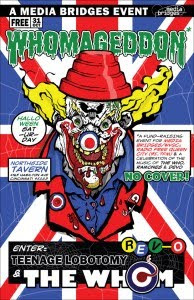 Halloween, local music, and legendary rock and roll bands will come together tonight for a unique event. Whomageddon will feature local bands dressed up and performing as The Who, The Ramones, and Devo. The performers include John Curley (The Staggering Statistics, The Afghan Whigs), Andrew Higley (Pearlene, Chocolate Horse), Scotty Wood, Jason Knarr, Dave Cupp, and more. This week, John Curley talked to the Enquirer about the event and his love of The Who.
The show takes place at Northside Tavern tonight, starting at 9 pm. Admission is free (you must be 21+ to enter), but proceeds from the bar will benefit WVQC, the new public access radio station being launched by Media Bridges.
WVQC has been in the works for several months, and Media Bridges is trying to raise the last bit of money needed to launch the station. Do your part in helping to get local voices on the air–and just have a good time–by coming out to tonight’s fundraiser.