When one thinks of sprawl the first thought that comes to mind is the spread out, low-density suburbs that have eaten away at our nation’s fertile farmland and natural environment. An immediate reaction is that density is in fact better, but is this so?

There is an assumption made that density would somehow reduce the amount of land needed for sprawling suburbs, and that greater amounts of land can be preserved. This is true in theory, but does not always happen once the market has its way. Furthermore, preserved land is not the same land it once was; meaning that the preserved “greenway” connecting your neighborhood to another community feature may or may not be beneficial to the natural systems that exist. Does it serve as a corridor for wildlife, is it farmable or is the preserved land serving any significant purpose outside of additional trees that are reducing the amount of CO2 in our atmosphere? Most likely not.

What has happened in Atlanta is something that should be learned from. Atlanta is arguably the king of sprawl in modern day America, but some might say, well Fulton County has a higher population density than does Hamilton County. Similar arguments can be applied to other less urban regions than Cincinnati. The fact is that Fulton County is just about built out with the exception of some land in the far southern reaches of the county. Furthermore, this built-out county has extraordinarily dense suburban areas including the central Perimeter area which includes 30 story office towers, residential towers and 12 lane highway systems to boot. The traffic is abysmal like much of the rest of Atlanta and the problem is only going to get worse. 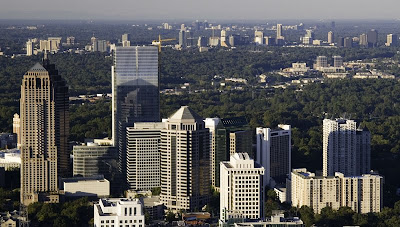 Midtown, Buckhead and Perimeter skylines in Atlanta – photo from mattsal88 on ImageShack

The reason is a combination of densities and form. The suburban areas of Atlanta, and even much of the urban areas, are almost entirely car-dependent. So a low-density suburban area that is car-dependent is one thing, but a high-density area of the same makeup is nightmarish. The “spatial mismatch” is exacerbated to a degree seen nowhere else in America than Atlanta and Los Angeles (Los Angeles County is the most populated county in the country at 9+ million). The people living in one area are working in another creating a spatial mismatch that is exacerbated by the high densities. They are not walking, biking or taking transit to a level enough that would offset its densities.

When you hear of the next “new urbanist” neighborhood on the fringes of a metropolitan area, or the next lifestyle center that pitches itself as being the next best thing to an authentic urban shopping experience, be wary. These are not real communities where store owners live in addition to running their business. The residents are most likely hopping in their car that is parked nicely within one of their two (or more) dedicated parking spaces and driving into the center city for work.

Higher densities in our suburban areas are not the answers to our sprawl issues. A correction of the spatial mismatch is what’s needed to truly create a sustainable metropolitan area. Natural systems need to be preserved in their truest form and our most fertile food-producing regions need to be maintained for their highest and best use. Higher densities in the core with high density satellite neighborhoods connected by high-quality transit options are the best possible solutions.