The United States Census released their population estimates for U.S. cities last week. The results are in and the results are decidedly undecided for Cincinnati. That’s not bad though for a city in the Midwest that has been experiencing decline for several decades.

When compared with the rest of Ohio, Cincinnati and Columbus are the only two cities to post gains while the rest of Ohio’s major cities saw significant declines – most notably Cleveland which has seen 9.2% of its population vanish since 2000.

Cincinnati ranks 6th in the Midwest behind Columbus (5.9%), Indianapolis (2.1%), St. Louis (1.8%), Chicago (1.5%) and Milwaukee (1.3%) with another seven Midwestern cities experiencing slower population growth or most likely population decline during the same span. 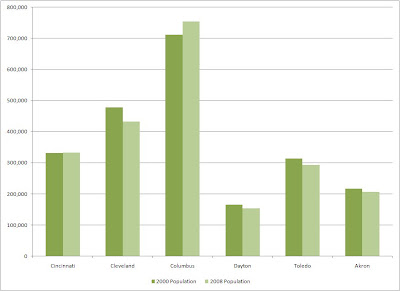 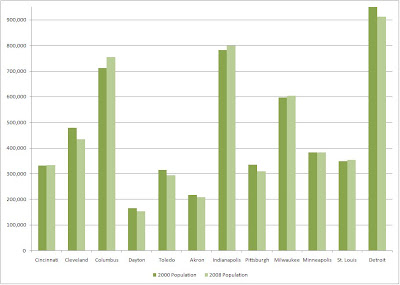 The population decline of many older American cities can be attributed to several things. Most common is the evidence of suburban sprawl and the exodus from the then polluted and overcrowded inner-cities.

The lesser of these examples that is covered is the changing American household. No longer can a neighborhood like Over-the-Rhine house 50,000 people like it once did. The market demands will not allow it as people look for walk-in closets, large bathrooms, offices, washer/dryer and the other modern amenities Americans hold dear. The result is that a fully occupied building in Over-the-Rhine that once housed 50 people may now only house 10.

This is the case for all older American cities that saw decline. Sure in part it was the exodus from the inner-city, but you can notice a difference in population changes between cities. Those that are experiencing minimal growth or minimal decline are those that I suspect are experiencing repopulating neighborhoods. Those with rapid decline are the cities that are struggling with this change and have still not managed to shake the decline that came at the benefit of the great American Dream.

As Cincinnati looks forward it must continue to build upon its strengths like its neighborhoods, culture and identity. At the same time we must realize where we stand. We are a old city, by American standards, and cannot expect to see the same population numbers we saw decades ago. Cincinnati also cannot expect to see growth like Columbus who has benefited from a liberal annexation policy there. Nor can we expect growth similar to the boomtowns of today that boast cheap land and labor that appeal to those kind of growth figures.

European cities have grown used to this stagnant population growth, but are still great cities. The Midwestern and East Coast cities in the U.S. must learn to do the same. What we should strive for is a stable population number and one that grows household incomes. Growing ourselves from the ground up is a great strategy Cincinnati can take, and one that will make the region stronger and healthier long-term with or without high growth rates.