“On a recent Saturday with about 10 other young professionals, locked in a new, for-sale Over-the-Rhine condo that didn’t have any heat talking about how we can make Cincinnati a better place for people like us. It was organized by CincyPAC — a political action committee of about 1,100 young professionals who specifically target Cincinnati City Council races to lobby for a better city for those in their age bracket — as a retreat where we might invigorate ourselves for this fall’s council elections.”

During this retreat the young professionals discussed what it is that could improve Cincinnati. Naturally their discussions were taken over by talks of the proposed streetcar system. As this effort progresses to bring fixed-rail transit to Cincinnati, the number of passionate supporters continues to grow. It’s not just the political wonks, it’s the young people, residents, business owners, and others who have seen what streetcars have done elsewhere, and what they once did for Cincinnati. Stay tuned as more and more get on board.

On another completely unrelated note. If you’re one of those people who believe nothing is happening at The Banks, well you’re wrong. While the bad economy has plagued many projects, it has been a gain for others like The Banks. Contract after contract is coming in under budget due to the competitive bidding process for the work. Small-business participation has exceeded initial goals, there have been 9,000 work hours without a lost-time accident, and the project is making some very visible headway. 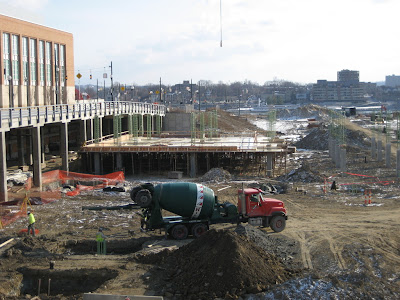 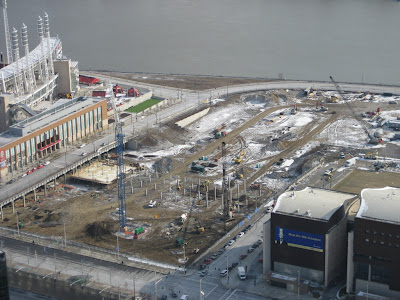 LEFT- You can see the first of the two-level parking decks that will lift the development out of the flood plain.
RIGHT – You can see the support columns rising first along the path of what will be Freedom Way.
Photos courtesy of Chad McCann