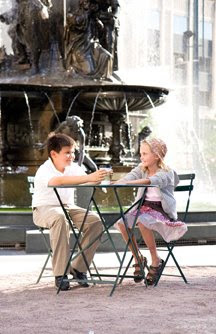 Saturday night (1/17) marked the regional premiere for the Off-Broadway show, I Love You Because, at the Know Theatre (GoogleMap). The comedic musical is a modern day telling of the romantic favorite Pride and Prejudice set in New York City.

Described as a “wickedly funny musical with enough heart to make the cynic in all of us melt.” When paired with a great dinner before hand, at the nearby Lavomatic Café, the show makes for a fun and romantic date in Cincinnati’s Off-Broadway Theatre District (GoogleMap).

The musical itself endears the audience with entertaining, hilarious, and downright catchy tunes. Certainly, the presence of the house band playing all of the music live adds a wonderful touch, but the primary actors were well rehearsed and very tight with some songs that could only be considered as tongue-twisters. In typical playwright fashion, the cast successfully took three small sets of props and transformed them into a variety of imaginative settings, inviting the audience to come along on the emotional journey of the four main characters, all quirky and different in their own right. Speaking of the quirky characters, the actors all did a marvelous job in conveying each characters’ personality. Without myself having seen the original New York production, I could only imagine that the authors would have had an exceptional performance such as this in mind.

All in all, if you and a date are looking for something different, I would give this a try. You’ll laugh and feel all “warm and fuzzy inside” as you watch the characters struggle with relationships and all grow closer together. Tickets are only $12, so for a few dollars more than a pre-filmed movie matinee, you can watch a live performance and feel the connection with the actors. I’m not typically a musical guy, but I don’t think you could go wrong with this comedic take on differences and the dating scene.