Unlike many Cincinnatians I grew up a Bearcat fan. I remember going to football games and what occupied most of the south endzone was impromptu games up catch by kids my age, the north endzone had some bleachers set up for opposing teams bands, but were rarely filled. A smokestack cast its shadow over those bleachers and parking lots surrounded the stadium making for plenty of tailgating opportunities for the handful of people that actually showed up – most of whom were forced into buying season tickets so that they could get basketball season tickets.

A lot has changed since then. The Bearcats are now a BCS school, the stadium has been expanded slightly and cleaned up, that north endzone is now occupied by a student section at capacity, and the south endzone has a filled fan section with a eatery and massive new scoreboard atop the large rec center.

We play teams like Oklahoma, South Florida, West Virginia, Pittsburgh and other top-notch BCS schools regularly…and we’re competitive. We also have the oldest stadiums in college football with one of the most unique settings anywhere. UC Athletic Director, Mike Thomas, aptly described Nippert Stadium as the Wrigley Field of college football, but it is also one of the smallest stadiums for a BCS school. 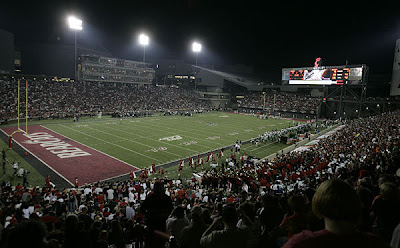 So with all this positive change, big time opponents, and a winning team you would expect a region of over 2 million people to be able to fill a 35,000 seat stadium for 6 home games a year. This past Saturday was Homecoming. It was a beautiful Saturday with not much else going on in the region and the announced crowd was something like 32,000 and change. It was announced, on the scoreboard, as “the sixth largest crowd in Nippert history.” Embarrassing.

It was a perfect day, Homecoming, Big East conference opener, the Buckeyes didn’t play until after the Bearcats finished, and the Bengals were scheduled for a road game on Sunday (and they suck). At the same time CBS is predicting that the Bearcats will win the Big East and head to Miami to play Virginia Tech in the Orange Bowl.

The team is 5-1 overall and 1-0 in the conference. Let’s start supporting them before it’s too late. Cincinnati has been waiting for a winner for many years now. Well we have one, and there are good tickets still available. Single game tickets can be purchased for as little as $35, and the Bearcats will be playing host to South Florida, Pittsburgh and Syracuse to finish out their home schedule.