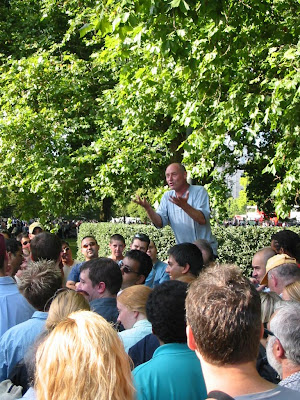 W. 4th Street has seen a buzz of activity in recent months. New stores have opened, new buildings have gone up, and new residents move in. In addition to this the area has also attempted to be rebranded as the ‘Soapbox District.’

A soapbox is a raised platform on which one stands to make an impromptu speech, often about a political subject. This is one of the angle that the branders were getting at. The other was to pay tribute to Cincinnati’s soap making history and the shape of many of the buildings in the W. 4th Street area.

I find the angle of public speech and discussion to be most interesting. Fountain Square was seemingly that spot, but that public space has been converted into a hybrid public/private space where I doubt this kind of thing would be tolerated any longer. The branders also mentioned how this could be the spot, in Cincinnati, where young people make their voices heard. Great, many of the new residents in that area are indeed young so this seems to possibly have some traction.

The problem is that there seems to be no concerted effort to make this into reality. I look to London’s Hyde Park. In the park’s NE corner (aka Speaker’s Corner) people come to speak publicly about what they wish. They are allowed to continue as long as it is considered lawful. I look at this example and see a huge opportunity at 4th & Plum (GoogleMap) in Cincinnati.

That location is right in the heart of the ‘Soapbox District’ and is currently occupied by a surface parking lot. An ideal scenario would be to acquire this lot and turn it into a park. Create a much needed dog park area within it, sitting places, and lots of trees. In addition to this, make the park the epicenter for public/free speech in the newly dubbed ‘Soapbox District.’ The idea is great, now let’s give it some teeth.