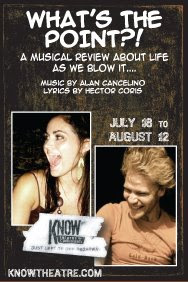 The musical is based on the popular 1950s and 1960s revue styles, which were known for commenting on popular trends and on society in general. Additionally this particular production has been described as “fast-paced” with each member, of the three-person cast, playing a variety of characters.

The Cincinnati premier will take place on Friday, July 18th and will run through Tuesday, August 12th. Shows on Fridays and Saturdays start at 9:30pm, while shows on Mondays and Tuesdays start at 7:30pm. You can get tickets for a mere $15 by calling 513.300.5669 (KNOW) or by stopping by the box office located at 1120 Jackson Street (GoogleMap).