Next week will be a big week for Cincinnati as the political spotlight will be shining directly upon our city. It all starts with the 99th annual NAACP convention being held at the Duke Energy Center. The convention is expected to bring an estimated 9,000 delegates and two VERY important special guests.

The two presumptive presidential nominees, Sen. John McCain (R) and Sen. Barack Obama (D), are both scheduled to address the NAACP delegates this coming week. Local NBC affiliate WLWT-TV, Channel 5, has announced that they will cut in to normal programming to broadcast both speeches live. This then allows the speeches to be shown on the giant LED board over Fountain Square – expect big crowds. 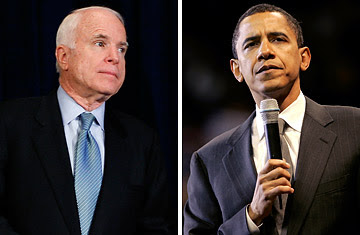 McCain and Obama – from http://randallps129.blogspot.com/

The real issue here is not all of the coverage Cincinnati will get, the political attention, or big crowds that will fill hotels and spend big money. The thing that should be most noted is how it all came to be…Mayor Mallory, and other key leaders, worked aggressively to lure the NAACP convention to Cincinnati over the convention heavyweight Las Vegas.

In addition to that the City has worked very hard at giving Downtown a “spit-shine” to ensure a good impression on the 9,000 delegates. This 1-million dollar effort included things like repairing damaged sidewalks, curbs, street corners, painting light poles and other small projects.