The presumptive Democratic presidential nominee – Barack Obama – addressed the NAACP Convention at 8pm, July 14th, 2008. People started waiting at the Duke Energy Center about 6 hours earlier at 2pm hoping to get into the convention center to be a part of a movement and history in the making. Obama did not disappoint as he dazzled the crowd with a wonderful speech (full text).

Those who weren’t lucky enough to get inside, and others looking for different atmosphere, gathered on Fountain Square – packing it to the gills. Local organizations put together some entertainment for the expected crowd that started gathering en mass around 5pm. Others who wanted to stay at home could do so thanks to the live coverage by local NBC affiliate, WLWT-Cincinnati.

The presumptive Republican nominee – John McCain – will speak Wednesday at 11:30am. You will also be able to catch this on WLWT, Fountain Square, or in person at the Conference. It’s great to see the level of excitement about politics this year. It’s even better to see it first-hand right here in Cincinnati. 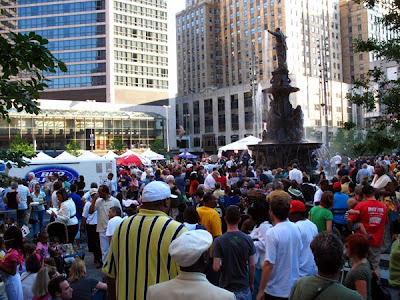