The dynamic, eclectic, increasingly safe neighborhood known as the Gateway Quarter is the latest chapter in seemingly unending book of urban revitalization efforts in Cincinnati. The Gateway Quarter is reinventing Over-the Rhine in many ways. The work by Cincinnati Center City Development Corporation (3CDC) continues to bring quality redevelopment efforts to an area town that has seen better days. I had the opportunity, along with some other members of the Cincinnati blogging community, to take a tour of the latest projects that 3CDC is developing. 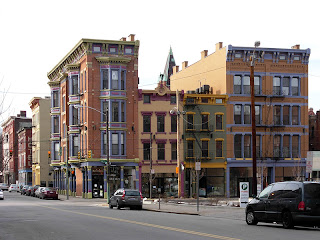 It is important to note that in previous attempts to revitalize OTR, the incrementalized approach helped incorporate many constituencies in the effort, but in the end, did not create that critical mass of residents, that would sustain growth. The new approach, by 3CDC, is to buy up a large portion of entire blocks, in order to create a more complete developmental pattern. It seems as though 3CDC understands that perception is OTR’s biggest enemy and that in order to change that they would have to condition their developments to create positive energy, and positive perception. They have done a wonderful job so far.

All of the units that we toured, Centennial Row, Duncanson Lofts, Gateway Condos, and Duveneck Flats, were all very unique in their unit layout and design. As we walked through all of the different options it was apparent how 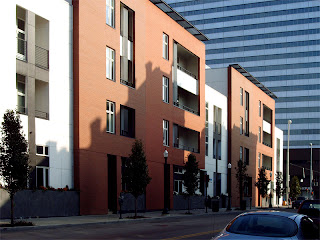 distinctive this kind of tour was. They were selling the neighborhood, as much as the actual units. Instead of each developer promoting their property to the buyers, this group was able to come together, and create a cooperative environment that should set an example for other development corporations.

It is hard not to get wrapped up in the vibrant, effervescent reaction that these developments give off. I feel confident that the work will continue, that the momentum is gaining, and that even now, this is a neighborhood that we should be proud of.