Will Northern Kentucky’s Manhattan Harbour ever get built?.

Northern Kentucky leaders certainly cannot be faulted for their lack of big plans, but their implementation has been suspect over the past decade. A multi-billion plan in Newport, for example, called Ovation sits as an overgrown lot on the city’s riverfront. Meanwhile, in Dayton, KY, officials there have been working for years to try to make Manhattan Harbour a reality. The 73-acre riverfront development would include high-rises, condos, shopping, a marina and more, but will it ever happen? More from the Cincinnati Enquirer:

DCI’s project with the city has been scaled down from a $1 billion investment to a $300 million to $500 million development. The newest version will have 45 upscale single-family building lots under the name the Commons, a combination multifamily, high-rise condominiums and single-family homes with a mix of commercial development in an area called the Lookout, and luxury multifamily apartments in an area called the Vistas.

Manhattan Harbour’s mixed-use development has been in the works since 2005, when DCI signed the development agreement with the city, which owns the land. In 2008 and 2009, nearly a half-billion dollars in state and local tax incentives were approved for the project. A $10 million sewer line was laid in 2010 to prepare for development. A 20-year tax increment financing district was created for the site.

Thanks to an equity investment from PNC Bank, the Catalytic Development Funding Corporation (CDFC) of Northern Kentucky is $2 million closer to its $10 million capitalization goal. With the recent investment, the Catalytic Fund is up to $6.5 million.

Once the $10 million goal is met, CDFC will begin making targeted investments in catalytic development and redevelopment projects in northern Kentucky’s urban neighborhoods in order to spur additional investment and revitalization in the area. The Catalytic Fund investments will provide patient capital for projects that could not occur due to private capital market constraints.

Patient capital does not always take the same form, but generally it is more flexible and willing to accept more risk than conventional funding. The purpose is to fill in gaps in a financing package to make a project more attractive to primary lenders. Patient capital tends to be the first money into a project and typically is repaid after the primary loan payment is made each payment period. This is a similar model that 3CDC uses when deploying Cincinnati Equity Fund capital.

The CDFC and the Catalytic Fund will be in very capable hands. Jeanne Schroer, the executive director of CDFC, has over 25 years of experience as a real estate professional specializing in project financing.

The CDFC and the Catalytic Fund were created in 2008 based on a recommendation by the Urban Renaissance Action Team of northern Kentucky’s Vision 2015 planning initiative. Since the fund’s inception, Jeanne Schroer has been working tirelessly to raise $10 million during tough economic times. This is a list of all the contributors to the fund so far: 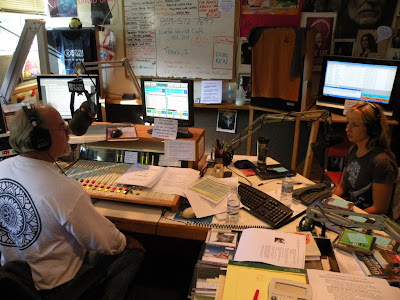 Thursday, April 29 marked the official 25th anniversary for local radio station 89.7 WNKU. WNKU serves as a strong force in the local community and will be engaging in some terrific things they have planned to celebrate this special milestone.

First though, a little perspective on the station and my experiences with it might be useful. In the early 1990s, my brother-in-law started telling me about WNKU and I would tune in on occasion. Things were much different then at the station than they are today. While they did play good music, it was secondary to the news offering and it was hard to even know when music was going to be played. Oh, and the signal, the major complaint for years, was awful which made it hard to pick up the station.

Around 2000, I started to listen to the station more as I had moved back into Cincinnati from college and things had become a little more musical. From that point I have had an ongoing and interactive relationship with the station. This involvement included volunteering for fund drives (they are a public station, you know, which means you can become a member here), helping at events, and even recycling my Christmas Tree with them. Needless to say, the station holds a special place in my heart. Forget Clear Channel, WNKU even with its warts, is the one radio station for me in Cincinnati. As for that signal? Well it is significantly better now than it was two decades ago, though it is still imperfect. Oh, and did I mention that I won the contest for the Top 89 of 2006 (yes that is me in the picture)?

Aside from community involvement such as presenting this weekend’s Spring Pottery Fair, WNKU does play some great and diverse music. Just a few of the artists played earlier this week in a one hour stretch on Michael Grayson’s Morning Music include Widespread Panic, Bruce Springsteen, Joni Mitchell, Brazilian Girls, The Avett Brothers and Norah Jones. There is a little something for everyone, and WNKU is bound to introduce some new artists to us as well.

To celebrate their 25th anniversary WNKU will be hosting a concert series of course! In talking through plans with Director of Development Aaron Sharpe earlier this week, there is palpable excitement over some of the shows they are helping to bring to town. It all starts tonight with a special show featuring Ben Sollee and Daniel Martin Moore. Tickets can be purchased at the door for $20, or in advance online or by calling (859) 572-6700 – $15 for members and $18 for non-members.

If you are unable to make it to the show tonight at Highlands High School (map), there will be plenty of other shows in the series for you to attend. Most of these are in the traditional venues around town, but Aaron did say that the station is hoping to organize a special blowout concert towards the end of the summer as the grand finale, so stay tuned for details.

The anniversary party they hosted was at last night’s final Tunes & Blooms show which featured a live broadcast and had about 3,200 people show up to catch Jake Speed as well as The Turkeys.

As WNKU embarks on the next 25 years, I asked Aaron what the future held. There were a few things he mentioned including offering a second station on their HD broadcast, and acquiring other frequencies to help with distribution as they recently did with 94.5FM in West Chester. Additionally, the station just hired its first full time sales position as things continue to grow and change.

Whatever the future may hold, we do not know. But what we do know is how great a community partner WNKU is today. Happy anniversary WNKU! You have risen from humble beginnings to places that nobody dreamed of, and we all look forward to seeing what is up your sleeve for the next 25 years.