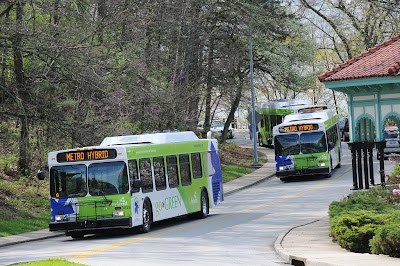 Earth Day 2009 marked the introduction of six new hybrid buses to Metro’s fleet. Since that time the buses have helped to reduce greenhouse gas emissions, provide environmentally responsible trip alternatives, save diesel fuel and money for the regional transit authority.

“We are proud of the results that we have seen from the hybrids and the positive response we’ve received from the community,” said Marilyn Shazor, Metro’s CEO. “Cincinnati has welcomed the hybrids and recognizes the value in our green efforts.”

To date, Metro officials cite that the hybrid buses have cut gas emission by some 190 tons while saving close to 7,000 gallons of diesel fuel. The savings not only represent an environmental benefit, but a financial one for the transit authority as well.

On Saturday April, 17 Metro will take part in Cincinnati’s Earth Day celebration at Sawyer Point by showcasing one of their hybrid buses at a booth where the transit authority will share information on other green initiatives they are overseeing like the new articulated buses that add capacity and increased efficiencies to Metro’s fleet, their LEED-certified transit hub in Avondale, use of reused rainwater for bus washing, burning waste oil to heat their garages, and the recycling of motor fluids such as antifreeze, refrigerant and power steering fluid.

Cincinnati Earth Day is free and open to the public and will run from 12pm to 5:30pm at Sawyer Point (map) along the banks of the Ohio River in downtown Cincinnati. This year’s festivities will include hands-on displays, a rock climbing wall, kayak paddle safety pool, ORSANCO’s aquarium, baby animals, story telling, an environmental puppet show, a green childrens fashion show, live music, a parade and more.

Metro will also be providing this information and more at another booth to be set up at the Cincinnati Zoo during Zoo’s Tunes & Blooms “Go Green” Night on April 24th.

“Overall, Metro’s services significantly reduce car trips and fuel consumption in Greater Cincinnati. A commuter who rides Metro 20 miles round-trip will decrease annual carbon dioxide emissions by 2.4 tons per year,” said Shazor. “As a tax-supported transit system, we are focusing on being green and saving green at the same time.”