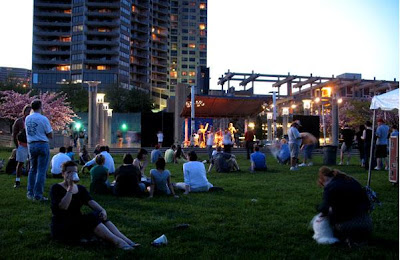 Over the last few weeks spring has begun to take root in Cincinnati. Among others, the Reds Opening Day had a huge turnout as usual, trees are blooming and the Genius of Water began flowing again as the ceremonial start to the spring season in Cincinnati. This Wednesday marks yet another seasonal rite of passage as Party in the Park returns to the banks of the Ohio River in downtown Cincinnati at Yeatman’s Cove.

Party in the Park is one of the old standbys for many Cincinnatians as it embarks on its 34th season this year. Festivities kick off at 5:30pm every other Wednesday, with the exception of the back-to-back Wednesdays in April. $2 off drink prices greet party goers for the first 90 minutes making it a favorite after work destination. Historically crowds range anywhere from 5,000 to 8,000, depending on the week and weather, which turns the park into the largest watering hole in town.

The presenting sponsors and the 2010 slogan tell you all you need to know about the music you will find at Party in the Park. With 96ROCK and Bud Light leading the way and the slogan “The Original Social Network” you should expect cover songs so that folks can sing along all evening long. While it may not be ideal for someone seeking out original music, this weekly party definitely makes for a great social setting to hang out with old friends and meet new ones in the shadows of Cincinnati’s growing skyline and on the banks of the mighty Ohio River.

Party in the Park (map) starts at 5:30pm and lasts until 10:30pm. The festivities will run through Wednesday, August 8. There are several parking options available nearby, but it often coincides with Reds or Cyclones games that will make parking more difficult. There is bicycle parking and bus service to the park, and it is within walking distance to many of Cincinnati’s major employers in the center city.

Cincinnati has several great live music offerings during the summer months that include both original and cover music. In its 3rd year, Fountain Square played host to the 2009 PNC MidPoint Indie Summer Series and saw record crowds show up to enjoy the live music in the heart of downtown Cincinnati every Friday night. Midpoint Music Festival will fill Cincinnati’s center city with all sorts of live music again this summer (stay tuned for more details later this week). And there are still two shows left at the Cincinnati Zoo Tunes & Blooms which takes place each Thursday evening in April.

Party in the Park photo by 5chw4r7z.