Ohio walked away with more than $24.5 million worth of transit funding, of which the overwhelming majority went to northeast Ohio, where the state’s two Senators are from, with $6 of transit funding going to each of the 2,088,291 people in the Cleveland Metropolitan Statistical Area (MSA). Cincinnati meanwhile ranks as Ohio’s most populous MSA with 2,155,137 people who received $0.13 each for transit funding (view full list of recipients).

The $6 per person transit funding for Cleveland equates to roughly half of Ohio’s total funding received and more than $12.5 million. The Cincinnati MSA barely made the list at all as Middletown, on the far northern reaches of Cincinnati’s metropolitan area, received the MSA’s only funding of just under $281,000. 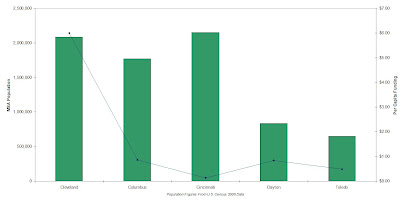 In a press release received from the U.S. Department of Transportation, Vice President Biden stated that, “Investing in these transit upgrades not only puts construction workers on the job at project sites, but supports American manufacturing jobs all the way down the supply chain. At a time when jobs are priority number one, that means twice the employment bang for the Recovery Act buck.”

One could make the argument that the Cleveland metropolitan area received the most money to help create and retain jobs in arguably Ohio’s most devastated market in terms of jobs and foreclosures. The evidence further supports this when you see that Columbus and Cincinnati, the state’s two strongest job markets, received the smallest per-capita funding. That is where the connections stop though, as Dayton, ranking close to Cleveland as one of Ohio’s worst economic performers, received a measly $0.84 per person for transit funding.

“Investing in modern, efficient transit systems will mean safe, reliable travel and clean air in our communities” said FTA Administrator Peter Rogoff. “These projects are putting thousands of Americans to work right now while improving the lives of millions of Americans for years to come”

Unfortunately while this is true, it seems that at least in Ohio that these funds were distributed based on political ties than anything else. Both Senator Sherrod Brown and Senator George Voinovich hail from northeast Ohio Maybe not shocking, but certainly disappointing especially if you are one of the hundreds of thousands living in Hamilton County that voted for Senator Brown in 2006 and in turn saw $0 of this transit funding.