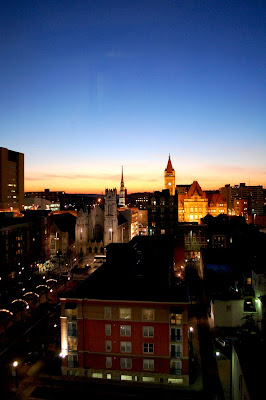 While Cincinnati does not fit the bill of a “small local government,” the city does have the opportunity to enhance residents’ experience with local government with little to no extra costs. Over this past winter, the City of Cincinnati started operating a Twitter account (@CincinnatiSnow) where anyone interested could follow along and stay informed on the latest snow emergency levels, procedures, status of snow clearing efforts and more. This joins a small group of other City departments/agencies that have joined the Twitter fold to further share their information with the public at-large, but what else could be done?

The City currently has a phone number that people can call to report overflowing City trash cans among other things. This system could be enhanced to allow people to tweet, text or email these reports to the City which would then be handled by an analyst – presumably the same person now answering the phone and handling the calls – so that the City could dispatch crews accordingly. If Cincinnati can not afford the upfront capital expenditure associated with solar-powered trash cans that automatically notify crews when they approach a certain fill level, then this could be the next best option.

Public meetings are currently broadcast on CitiCable, Cincinnati’s local access television station, but why not turn the audio recordings already done into podcasts or broadcast them on UStream? Those interested in Planning Commission or City Council meetings, for example, could subscribe to those podcasts and listen to the meetings at their convenience. Broadcasting the meetings on UStream would create another means in which the public could stay connected with City Hall while adding no additional costs to the City’s budget.

The City already has the ability to record the audio and video for all of its public meetings, so all it would take is the initial effort and maintenance of operating the new media outlets. Young talent already possesses the ability to do this and could be managed on a department by department basis where existing staff takes on the minor work increase, or a singular employee could manage the entire system from the dissemination of information to its collection from those engaged in the process.

The beauty of new media is that it allows for instant exchange of information and ideas. Effectively taking advantage of this at the local government level could improve services, make public information more available, and allow for an interaction between citizen and government that is not currently seen.