As a 10 year old, visiting my grandparents for the weekend was the equivalent of traveling to a foreign country. At four in the morning, when the moon was full and I was fairly certain it was still the middle of the night, I would roll over in bed to the sound of pots and pans clanging in the kitchen. The smell of bacon often came next, followed by the sizzle of potatoes in hot oil. I certainly wasn’t an early riser back then, but inevitably I would rub my eyes and wonder out into the kitchen.

My grandpa would be perched at the breakfast table, reading the paper with his thick-rimmed glasses resting on the very tip of his nose. He was a man’s man; he drove a truck for a living, brewed his own beer and lived for Notre Dame football. But in the morning light, he was a softie.

“C’mon, kid,” he’d say, as he’d pat the seat cushion next to him. I’d slide into that mustard yellow booth and together we’d watch my grandma, spatula in hand, fry eggs and potatoes over her tiny 1950’s stove. 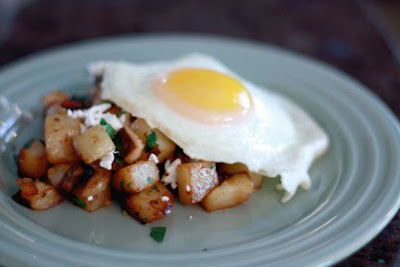 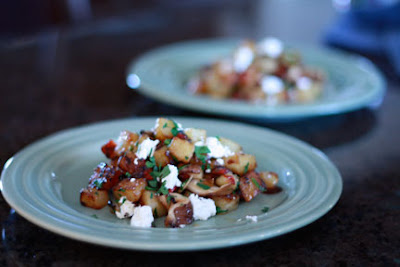 Potato Hash with Mushrooms and a Fried Egg photographs by Courtney Tsitouris.

She was by no means a fancy cook. Her breakfasts involved straightforward, simple ingredients. But her fried potatoes were world class. Her trick was keeping them in the skillet, undisturbed, until a deep, golden crust developed on the outside. Then she’d stir them with a wooden spoon, mixing them with the crackling, salty bits that collected on the bottom of the pan. Those pieces were like hardened flavor bombs – the more they cooked, the deeper and more delicious they became. I still think about them, almost two decades later.

I’ve used her method for frying potatoes a lot over the years as a base for more involved dishes. What I really love to do is mix them with a bunch of onions that are cooked over low heat until they’re amber colored and sweet like candy. I like to add diced red bell pepper and minced garlic, too. I mix in sautéed chanterelle mushrooms for an earthy note and finish the dish with – and this is the one of the best parts – crumbled goat cheese. As the cheese melts ever so slightly on top of the hot vegetables, I top the whole thing with a fried egg (view full recipe).

The first time I served this dish to my mom as a main course, she did a lot of ooohing and aaahing. We discussed, far longer than necessary, its surprising complexity and how every lovely forkful was so different than the last. But we also did a lot of talking about grandma – about that old kitchen, about how she used to wake up in the dark and cook breakfast and about how she loved good, honest food. She may not have been a gourmet cook but she sure made a mean potato. And now, so can you.

‘Meatless Mondays’ is an ongoing series on UrbanCincy that explores one of the recommendations of Cincinnati’s Climate Protection Action Plan (aka Green Cincinnati Plan) – try to go meatless one day a week. UrbanCincy’s ‘Meatless Mondays’ series is written and photographed by Courtney Tsitouris who is a cook, designer and author of www.epi-ventures.com, a blog about dining in and dining out in Cincinnati.