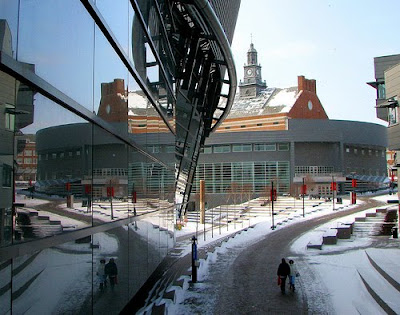 U.S. Representative Steve Driehaus (D-OH) will be in Cincinnati today for a field hearing on hard to count populations on the University of Cincinnati’s Main Campus at 2pm. The hearing will take place at UC’s Main Street Cinema in the lower level of the Tangeman University Center (map).

Representative Driehaus will be joined by a host of local officials including Cincinnati Mayor Mark Mallory, Thomas L. Mesenbourg who is the Acting Deputy Director of the U.S. Census Bureau, Representative Wm. Lacy Clay (D-MO), Dave Scharfenberger who is the Director of Training for Working in Neighborhoods, Jason Riviero with the Leauge of Latin American Citizens of Ohio, Suzanne Hopkins with the Center for Independent Living Options, Josh Spring with the Greater Cincinnati Coalition for the Homeless, and Todd Duncan with UC’s Department of Housing & Food Services.

The hearing will include testimony from the Subcommittee on Information Policy, Census, and National Archives and the House Committee on Oversight and Government Reform. The intent is to better understand how to count historically under-counted populations in the U.S. Census. Recently a Census District including part of Cincinnati’s Over-the-Rhine and West End neighborhoods was identified as the 6th most difficult to count Census District in the nation.

In Cincinnati, Mayor Mallory has championed efforts over the last several years to ensure that Cincinnati is fully counted and represented in the U.S. Census with the Cincinnati Counts campaign. The U.S. Census helps determine how to distribute $300 billion in federal funds to local, state and tribal governments each year, and during the last full count in 2000, the U.S. Census Monitoring Board estimated that the United States’ population was under-counted by over 3 million people who are often either minorities, children, the poor, and people in large urban areas like Cincinnati.

Officials now estimate that Cincinnati’s population is currently uncounted by approximately 45,000 people which results in the loss of $2,263 per year, per person in federal funding for schools, public safety and more. Over a ten year period, Cincinnati officials estimated that this cost Cincinnati about $104 million in terms of lost funds.