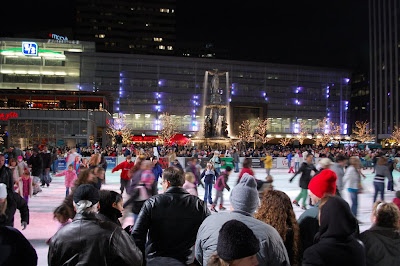 Just over a week ago the U.S. Bank Ice Rink at Fountain Square closed down after a record breaking season. While the rink closure is always a sign of the spring to come, this one was especially meaningful in quite a few ways.

First off, the 2009-2010 was a record breaking season for the rink as it welcomed more visitors than ever before. In total, just over 49,000 skaters found their way to Fountain Square to take part in what has quickly become a winter tradition in downtown Cincinnati. This season the rink saw a 22% increase in the number of visitors over last season and the growth is nearly exponential when compared to the times prior to the renovation of the Square. Before 2006 the rink averaged about 50 skaters a day, but this season saw that number balloon to an average of 591 skaters each day.

Clearly some days are busier than others, and this year was no exception. This season, the rink was able to host many events which featured discounted or free skating for families and students which served as a great way to bring people into the central business district. Without question, this past season of ice skating which started on Thanksgiving Day was the most successful the rink has seen to date and it only bodes well for the future.

In addition to ice skating, the rink is also home to the HGC Broomball League which was played during the first six weeks of 2010. In total, forty teams participated including The Little Kings & Queens of Cincinnati which featured two UrbanCincy writers. While the season was not the most successful on the ice, it was a resounding success off. Our one win, and many losses, were well documented by our number one fan 5chw4r7z. Playing alongside Jenny & Dave of UrbanCincy were many other folks passionate about the heart of our city including Brad Thomas of CincyStreetcar and Gordon Bombay of Queen City Discovery.

The broomball league is one of the more popular activities that Fountain Square produces all year and it fills up quickly each year. This season included games played during the week as well as the first ever Saturday league, which will likely be continued next season when the rink opens again. Here are some “official” pictures of the championship games which brought the season to a close during on February 17.