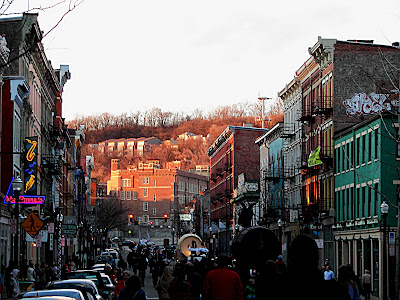 This weekend marks the 2010 version of Bockfest in historic Over-the-Rhine and downtown Cincinnati. The annual festival celebrates the arrival of bock beer which is traditionally a Lenten brew originally produced by European monks in the 14th Century. And while the festival derives its name from the beer and it takes place in Cincinnati’s richest of brewing neighborhoods, it truly is about so much more than the beer.

Prior to prohibition, Over-the-Rhine was a densely populated neighborhood home to many of Cincinnati’s beer barons including Christian Moerlein among others. The mixed-use neighborhood featured breweries, bottling plants, lagering cellars, residences and businesses for all those who worked there. Much of this history is featured on the annual Prohibton Resistance Tour (sold-out) which will take over 600 visitors through some of the old buildings, cellars, and tunnels in the neighborhood.

Another way to get to know the neighborhood is through the Historic Church Tour which occurs on Sunday afternoon at 2pm. Many of the churches on the tour are over 150 years old and are home to some of the most stunning architecture in the city. In addition to the six churches on the walking tour, each tour-goer will receive drink tickets good at Bockfest Hall located at the historic Kauffman Brewery (map).

And of course, there is the beer. At this year’s Bockfest there will be the annual favorites like the Christian Moerlein Emmancipator Dopplebock and Hudy Bock brewed with a special recipe this year brought to us by Michael Carver of Northern Kentucky. The highlight of this year’s Bockfest might very well be the return of longtime Cincinnati brew Shoenling Bock which hasn’t been produced in over 25 years.

While there are many activities leading up to the Bockfest festivities, the official start is the parade on Friday evening originating at Arnold’s at 5:30pm. Keep an eye on UrbanCincy for an article later in the week detailing the specifics of the weekend!