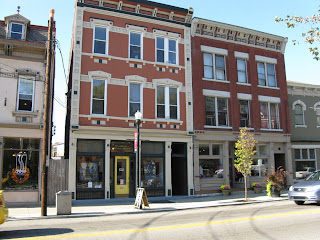 You may know Bellevue, Kentucky for its historic neighborhoods and the unique shops in the pedestrian-friendly Fairfield Avenue business district. Or you may know its “shopping center district” with big box retailers and fast food restaurants in an auto-oriented plaza. City leaders want new developments to be more like the former and less like the later. That’s why the Bellevue community is working on a new form-based zoning code that fits with the city’s motto of “Preserving the Past, Preparing for the Future.” The code will reportedly encourage walkability and the mixing of uses in new developments.

People who live, work or play in Bellevue have been able to get involved in the efforts to adopt a ‘Smart Code’ from the beginning. On January 27, the first public meeting featured architect Jeff Raser of glaserworks explaining how the code works. At the meeting, many residents were initially skeptical, not understanding the purpose or implications of the change, but came to understand the benefits as Raser answered their questions.

Raser explained that public involvement is essential if the code is to be successful. If citizens participate now, they have the chance to “prescribe” how new developments should look, feel, and function. Residents and developers will both benefit as new projects get off the ground quicker due to the reduced need for zoning variances and other time-wasting processes.

The next public meeting was held in February, allowing citizens to participate in a “visual preference survey.” Results from the meeting showed that citizens overwhelmingly wanted new developments to better fit in with existing historic structures. They also wanted to preserve public parks, plazas, and views of the Ohio River and Cincinnati skyline.

The last chance for citizens to have their voices heard will be next week, from Monday, March 22 to Wednesday, March 24, when the city is holding a charrette, or public workshop, at Bellevue’s Callahan Community Center (616 Poplar Street). Various topics will be covered throughout the charrette, and open house hours will allow citizens to share any other opinions or concerns they may have. An open house “pin up session” will be held on Thursday, March 25 from 6:00 to 7:30 p.m., where final results from the charrette will be presented.

Photo courtesy of the Coding Bellevue.