“What’s in this incredible sauce?” I innocently asked the waitress. In response, she threw her head back and cackled the way people do when they know something but have no intention of letting you in on the secret. Clearly, it was going to take more than a sweet smile to get this woman to talk, but more on that later.

The dish I was asking about was the Mae Un Du Bu Bok Um ($14.95) at Riverside Korean Restaurant – a tofu and vegetable stir fry that had me reeling from the first bite.

“Reeling?” you ask. Yes, if that’s what you would call me clutching my heart and repeating the word “wow” over and over again. My husband ordered the Dolsot Bibim Bab ($15.95), a popular rice and vegetable entree that’s served in a hot, stone bowl and topped with a fried egg at the last minute. His food was delicious, but it was the stir fry that had me threatening to storm the kitchen so that I might steal the recipe. 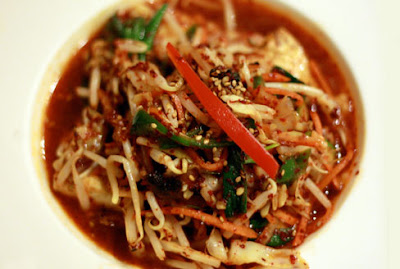 First of all, the food looked as beautiful as it tasted. A stack of perfectly julienned vegetables – pan-fried and obviously lovingly cared for — wrapped around each other in a glistening, messy swirl of color. The tofu was so soft it looked more like melted cheese than a soy product.

And then there was that pool of sauce. The sauce whose recipe I tried to weasel out of the waitress, the sauce I’d probably eat on my breakfast cereal if I could. It entrenched the fried cabbage, long hot peppers, and vegetables with sweetness first and then heat.

People who write about food love to talk about umami, the mysterious fifth taste said to be found in many soy sauce related dishes. I’ve never been one to notice, but in this sauce, the savory sensation overwhelmed me in a lingering, almost haunting manner. 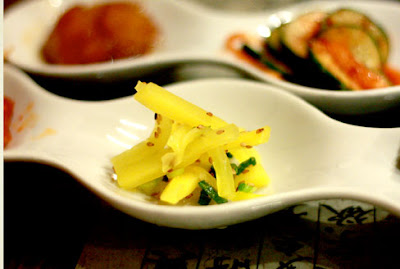 I proved to be a particularly poor dining companion when the banchan arrived. The half dozen or so complimentary small bites were, as my husband tried to tell me, meant to be shared alongside the meal. But sharing was difficult when the sweet, honey potatoes melted so quickly in my mouth and the spicy kimchi was so finger-licking good. Each one, more visually sophisticated than the next became a carnival of flavor and a fun counterpoint to the main course.

After all of our plates were empty and our bellies were full, I thought I’d give it another go with the waitress. “So, this is a soy based sauce, right?” I asked her in a hopeful tone. “Yes,” she said, “soy sauce, vinegar, sugar and some other ingredients.” Her voice trailed off as she made way back to the kitchen. I guess that was going to have to do for now.

‘Meatless Mondays’ is a new series on UrbanCincy that explores one of the recommendations of CIncinnati’s Climate Protection Action Plan (aka Green Cincinnati Plan) – try to go meatless one day a week. UrbanCincy’s ‘Meatless Mondays’ series is written and photographed by Courtney Tsitouris who is a cook, designer and author of www.epi-ventures.com, a blog about dining in and dining out in Cincinnati.