First instinct may tell us that widening a congested highway will help reduce traffic congestion, but the reality is quite different. Highway widening projects not only create additional congestion during the construction work, but also increase the highways usage once work is complete thus contributing to the cycle of congestion.

Cincinnatians are soon to experience what may be the most tumultuous highway construction period ever. Interstate 75 will be reconstructed and widened roughly from the Norwood Lateral to the Ohio River including the Brent Spence Bridge and its approaches. This construction work will cost billions of dollars and create a decade-long nightmare for Cincinnatians with no other commuting options than their automobile. 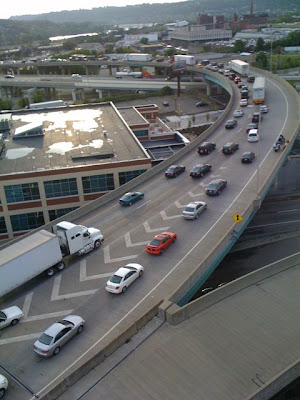 There are two primary reasons for this: 1) the work being planned now will take more than a decade to complete and by that point traffic demands will increase and call for additional capacity not being anticipated now, and 2) the completed improvements will encourage additional drivers to take the heavily traveled corridor instead of taking what may be less direct side routes. The second factor is often experienced in its inverse when people take less direct routes to avoid what may be perceived as a more cumbersome route due to congestion or tolling for example.

In 1942 Robert Moses noticed that the highways he had built around New York City in 1939 were somehow generating greater traffic problems than had existed previously. Since then, the phenomenon has been well documented, most notably in 1989, when the Southern California Association of Governments concluded that traffic-assistance measures, be they adding lanes, or even double-decking the roadways, would have no more than a cosmetic effect on Los Angeles’ traffic problems. -Andres Duany in Suburban Nation

Cincinnatians should learn from Atlanta where they have mastered the art of expanding highways to unbelievable measures. The infamous “Connector” running through Midtown and Downtown Atlanta carries both I-75 and I-85 traffic and currently has 14 lanes of moving traffic which is being widened to include an intricate system of parallel roadways and ramps that bloat the stretch of highway to some 20 or so lanes. 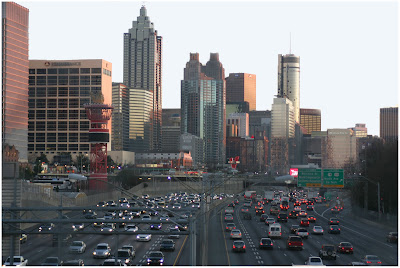 The “Connector” through Midtown Atlanta as it approaches Downtown on a typical evening commute.

But even with the large vehicle capacity, through truck ban, HOV lanes, and parallel roads the highway is still a congested mess each rush hour and often throughout much of the day (including weekends). The problem in Atlanta is that their rail system, MARTA, does not run along either the I-75 or I-85 densely populated and traveled corridors.

When planning for the reconstruction of I-75 through Cincinnati, community leaders need to think beyond the asphalt and realize that additional transportation modes are what will ultimately reduce congestion along the I-75 corridor. Light rail right-of-way is reportedly being planned for in the redesigns and needs to be a serious priority of the effort. It would be short-sighted and misguided to attempt to ease congestion by only addressing one mode of transportation.