Failure, young love, parental pressure, abortion, homosexuality, suicide, sex, abuse, repressed hormones, and getting kicked out of school. It’s not the description of the next hot reality show, it’s the plot line to an out of this world musical.

If overbearing divas with vibrato and too many jazz hands come to mind when you think of “musical theater,” the newest show of the Broadway Series at the Aronoff Center may cause you to reconsider your definition. Spring Awakening: A New Musical is actually a very old play and has won eight Tony Awards. Author and playwright Frank Wedekind wrote Spring Awakening in 1891, and the translated version serves as the basis for this emotion-charged musical that is more rock concert than Rogers and Hammerstein.

Spring Awakening follows the lives of teenagers in 19th Century Germany as they struggle with teenage angst and blossoming sexual desires in an intensely repressed society. Though the source material is over 100 years old, the feelings and emotions that are represented are universal and carry through to today. 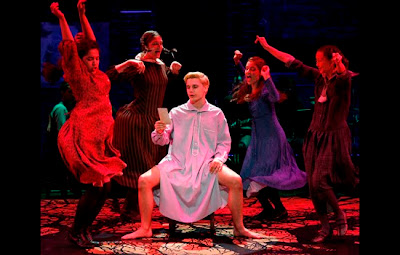 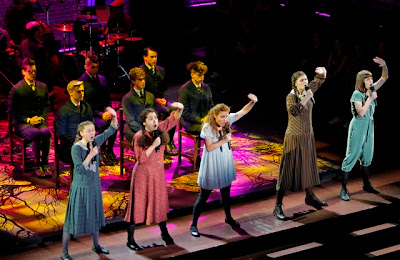 Tony and Grammy award winner Duncan Sheik composed the music to accompany the storyline. His songs range from alterna-folk ballads to upbeat rockin’ numbers, all with lyrics that truly speak to the raw emotions experienced by the kids on stage. Instead of headset or lapel mikes, the actors whip out hand held microphones or belt the tunes from on stage. This unique choice makes for a great sound experience, since the soloists are well heard, and the group numbers blend together beautifully.

The set design by Christine Jones and lighting by Kevin Adams make for amazing visuals. The stage is set in a bare bones style that evokes an old German brick school, with actors rarely leaving the stage. Props on the wall and a dazzling array of lighting styles juxtapose the stark reality of the storyline with the neon emotions of the teenage mind. Some of the audience members actually sit on the stage, with cast members sitting next to them between songs… unless they’re running, jumping, rolling around on the floor, doing crazy hand motions, having sex, or flipping you off.

The majority of the cast is young – either just out of undergrad or even high school. Look out for Christy Altomare, who plays the female lead of Wendla. She is a graduate of University of Cincinnati’s CCM as of 2008, and brings a sense of innocence and a crystal clear singing voice to her role. Honestly, the entire cast is superb – their energy keeps the show flowing smoothly and they blend together as a group better than the kids on Glee. Other notable roles include Taylor Trensch as the uniquely coiffed Moritz, and Angela Reed and John Wojda who play all the adults in the show.

The adult themes within the show may not be appropriate for young children. So leave the eight year old at home, but if you’ve seen a Judd Apatow film (especially an unrated one), you’ve seen more risque material.

Spring Awakening is playing at the Aronoff Center for the Arts (map) now through Sunday, January 24. Tickets start at $20 and can be purchased online, by phone at (513) 621-2787, or in person at the Aronoff Center box office at 650 Walnut Street in downtown Cincinnati. Off-street automobile and bicycle parking is available and the Aronoff Center is well-serviced by Metro’s Government Square bus hub. To see which route is most convenient for you, and to plan your trip now, use Metro’s Trip Planner.